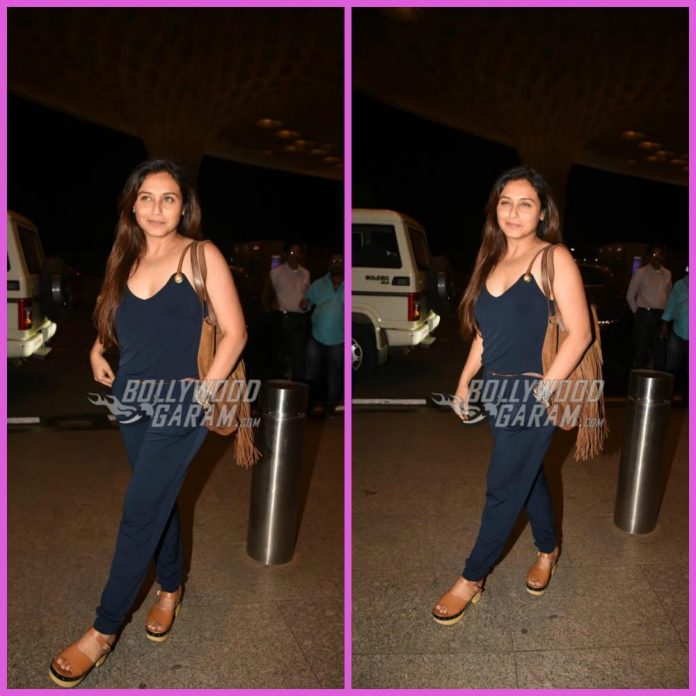 Rani Mukerji is all set to return to the silvers screens after a big break that she took post the birth of her daughter, Adira. The Saathiya actress was snapped at the airport and was all smiles as she posed for the shutterbugs in Mumbai on June 7, 2017. Rani looked gorgeous in a blue jumpsuit styled with brown platform sandals before her flight to Dubai.

The beautiful actress recently wrapped the shoot of her come-back flick Hichki, which is directed by Siddharth P Malhotra and produced by Maneesh Sharma under the banner Yash Raj Films. Rani, in a recent interview, had talked about her return to films and said that she was looking for an exciting script. The upcoming film, Hichki is all about looking at things from a positive perspective so that your dreams can be achieved with ease. Talking about her comeback, this will be her first movie post the birth of her daughter, Adira and Rani seems quite worked up about it!

On her birthday, Rani Mukherji had gone live through her Facebook page and interacted with her fans and talked about her motherhood, her husband Aditya Chopra and about her return to films. The actress was happy with the response and love that she got from her fans.

Here are the photos of Rani Mukerji from the airport, rocking her navy blue jumpsuit –