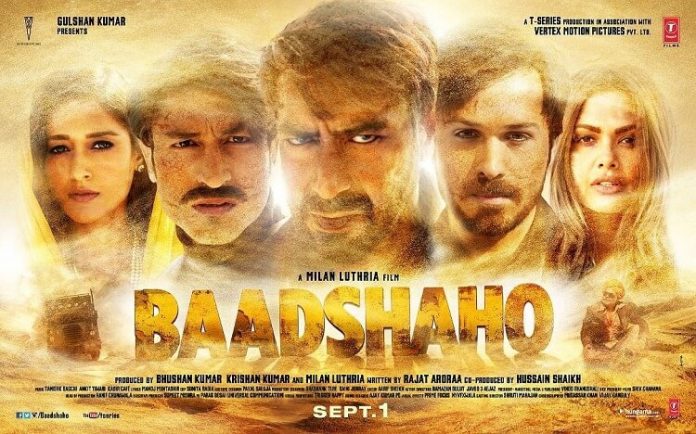 The Official Baadshaho Teaser starring Ajay Devgn released on June 19, 2017. The film also features Emraan Hashmi, Ileana D’cruz, Esha Gupta, Vidyut Jammwal and Sanjay Mishra in the lead roles and the teaser gives us a glimpse of each character. Makers have also released intense character posters of each actor in the film along with the teaser.

Baadshaho is set in the background of emergency period in India from 1975 – 1977. All six characters in the films are rebel thieves who take advantage of the situation to execute their plans of stealing wealth from the Royals of Rajasthan.

In the film, Emraan Hashmi’s character belongs to a poor family. He has a thick marwadi accent and is a playboy. He can be seen doing some fierce action stunts as he accompanies Ajay Devgn on their quest. Ajay Devgn’s character too belongs to a poor background. Ajay’s intense look in the film might give you goosebumps as he leads this team of thugs. His heavy dialogues and excessive violence will remind you of his role in his 2010 film, Once Upon A Time In Mumbai. Esha Gupta and Ileana D’Cruz are also seen as a part of the team. Esha looks outrageous shooting bullets while Ileana plays the role of a rich girl.

The tagline of the teaser reads, ‘An Elite Army Versus 6 Badasses’ and ‘2017 will be the year of the Bad’. The concept of the film is exhilarating. It has an outstanding star cast and we just can’t wait for it’s official trailer. Directed by Milan Luthra and produced by Bhushan Kumar and Krishan Kumar, Baadshaho is slated to hit theaters on September 1, 2017.

Check out all the amazing character posters from Baadshaho –

The badass in the bandana! @Baadshaho