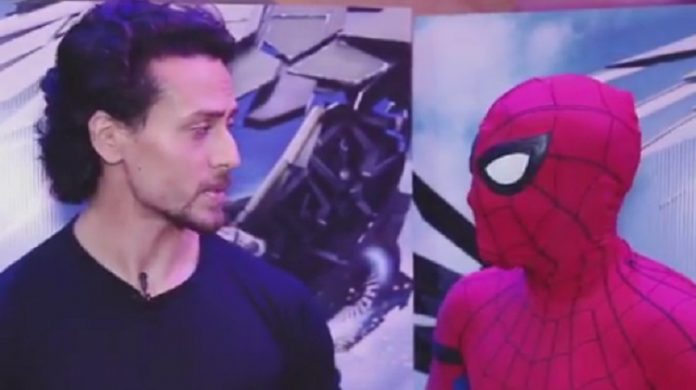 Bollywood actor Tiger Shroff will be the voice of superhero Spider-Man in the upcoming film Spider-Man Homecoming (Hindi). The Munna Michael actor shared this exciting news through a video on his Instagram account which he captioned – “So excited to be the voice of my favorite Superhero, #SpiderMan in Hindi for Spider-Man: Homecoming. Hitting the theaters on July 7, 2017. Let’s Kill It @sonypicturesin! ? –#SpiderManHomecoming#AapkaApnaHero #July7″

He confessed that Spider-Man is one superhero character that he always wanted to play and finally he is getting a chance to dub the lead character of the film in Hindi. Talking about becoming the voice of Spiderman in Hindi, Tiger Shroff said, “I can’t express enough my excitement to be the voice of my childhood superhero Spider-Man in Hindi. I have grown up watching Spider-Man movies and I must say that he is the one superhero character I have always wished to play… I hope audiences like me as Spidey’s voice in Hindi.”

Talking about Tiger’s collaboration with makers of the Spiderman franchise, Vivek Krishnani MD Sony Pictures Entertainment says, “Tiger is not just a youth icon but has a strong appeal among family audiences, who prefer clean entertainers. Tiger’s appeal and popularity extend to the millennials. For us, it’s not just the voice but also the fact that Tiger embodies dexterity and physical agility that one associates with Spider-Man, which makes this association truly special and exciting.”

Spider-Man Homecoming is all about Peter Parker handling his high school life as well as the responsibilities of being a superhero. In this one, Peter Parker faces a new villain, Vulture – it will be interesting to see how this goes! The movie also stars Tom Holland, Michael Keaton, Jon Favreau, Zendaya, Donald Glover, Tyne Daly, Marisa Tomei, and our favorite – Robert Downey Jr!

So excited to be the voice of my favourite Superhero, #SpiderMan in Hindi for Spider-Man:Homecoming. Hitting the theatres on July 7,2017. Let's Kill It @sonypicturesin! ? – #SpiderManHomecoming #AapkaApnaHero #July7