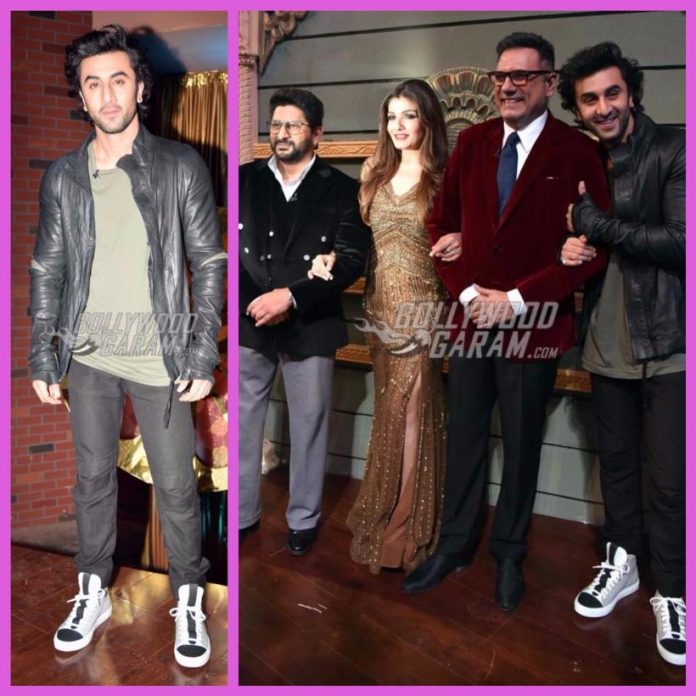 Actor Ranbir Kapoor is on a promotional spree and landed on the sets of the show Sabse Bada Kalakar to promote his upcoming film Jagga Jasoos in Mumbai on June 28, 2017. The actor turned up alone for the promotions without his co-star, Katrina Kaif.

The two were last seen together promoting their film on the sets of the reality show Sa Re Ga Ma Pa Li’l Champs. Ranbir was seen having fun with the contestants and the judges of the show – Raveena Tandon, Boman Irani and Arshad Warsi. The Barfi actor looked great in a green t-shirt, black denims and a black leather jacket.

Going by the pictures, Ranbir was seen dancing with Johnny Lever’s daughter, Jamie Lever. The actor was also seen sharing a few light moments with actress Raveena Tandon. The judges, too posed with Ranbir Kapoor for a group picture when the Ae Dil Hai Mushkil actor was seen planting a kiss on the cheek of Boman Irani. The episode is expected to be fun but the audience could have loved it even more if Katrina could have made it for the promotions.

Jagga Jasoos is one of the most awaited films of 2017 and is directed by Anurag Basu and will mark the second collaboration between Ranbir and Anurag after Barfi. Pritam has composed the music for the film and the songs Galti Se Mistake, Ullu Ka Pattha and Jhumritalaiya have already become popular among the listeners.