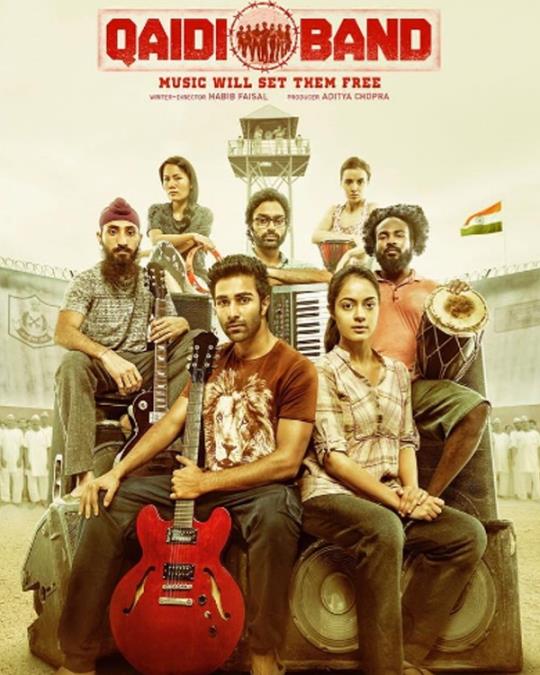 Ranbir Kapoor and Anushka Sharma recently introduced upcoming actors Aadar Jain and Anya Singh at a press event. A film poster of their Bollywood debut Qaidi Band has been released by a popular film critic Taran Adarsh on July 18, 2017. Aadar in the poster can be seen sitting with his guitar and band while Anya sits next to him.

Anya and Aadar, looked gorgeous during the introductory press event, but the poster has shown the two in a complete de-glam avatar. The official Twitter handle of Yash Raj Films also shared another poster of Qaidi Band, which shows Aadar standing with a guitar, while Anya stands next to him with a mic. Ranbir during their introduction press event had revealed that Aadar has earlier assisted filmmaker Karan Johar for the film Ae Dil Hai Mushkil.

The Barfi actor while talking about his cousin Aadar’s experience as an assistant director on sets of Ae Dil Hai Mushkil said, “I used to ask Aadar to say Aishwarya’s lines while I got ready for my sequences. I used to make him enact Aishwarya’s scenes too.”

When Anushka introduced Anya Singh, the Rab Ne Bana Di Jodi actress said that she relates to her journey as both of them belong to non-filmy families. Anya, during the press event, expressed that she would also like to work with Ranveer Singh and said, “When I saw ‘Band Baaja Baarat’, I became his fan. I find him very relatable.” The upcoming film Qaidi Band is directed by Habiib Faisal and produced by Aditya Chopra. Yash Raj Films has earlier too launched some of the new faced in Bollywood including Anushka Sharma, Vaani Kapoor and Ranveer Singh. Yash Raj Films Twitter handle has also announced that the trailer of the film Qaidi Band will be released at 12:30 PM on July 18, 2017.