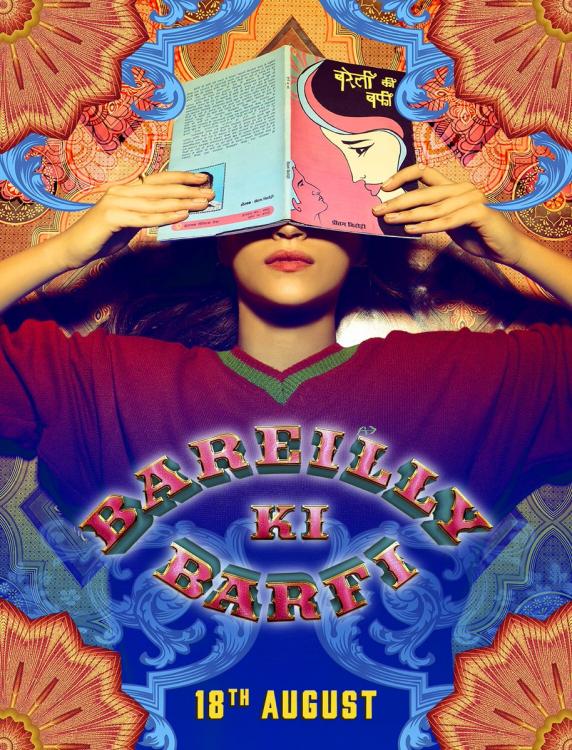 The audience will soon be treated with another fresh pairing of Ayushmann Khurrana and Kriti Sanon in the upcoming film Bareilli Ki Barfi. The film also stars Rajkummar Rao and Kriti dropped the first poster of the film on her official Twitter account. The poster has shown Kriti wearing a red pullover and holds a book which has the name of the film.

The poster had the caption, “I cant believe what i’ve just read!!#BareillyKiBarfi Just cant wait for you to read it..Here’s a glimpse @Ashwinyiyer @junochopra.” Ayushmann soon followed and Tweeted, “How did you manage to grab this one @kritisanon? How? This book is too special. #BareillyKiBarfi #18thAug.”

Co-star Rajkummar Rao too Tweeted, “This book changed my life.. here’s a glimpse of #BareillyKiBarfi #18thaugust @kritisanon @ayushmannk @Ashwinyiyer @junochopra.” The film is directed by Ashwiny Iyer Tiwari, who in a recent interview with a leading daily revealed that the movie has inspirations from the French book, Ingredients of Love. Bareilli Ki Barfi is produced under the banner of Junglee Pictures.

The director also revealed how they came up with the idea of the film and said,“I was tired, but I couldn’t put the book down. I even made Nitesh read it and he agreed that the basic story could become the theme for a film.” Ashwiny added that she shared the story with the producers Guno Chopra and Abhay Chopra and they took a lot of efforts to contact the publisher of the book in France and got the rights. The story is about three characters, out of which Ayushmann is the owner of a printing press while Rajkummar Rao works under Ayushmann in the printing press. Kriti will be seen playing the role of a young girl from the state of Uttar Pradesh, India. The upcoming romantic comedy film will be releasing in theatres on August 18, 2017.