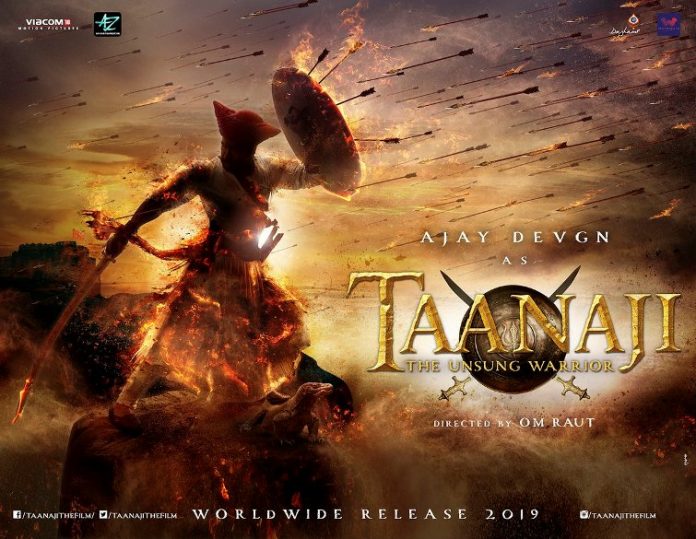 Bollywood has seldom failed in making biopics. Be it Mary Kom, M.S.Dhoni: The Untold Story, Neerja or Dangal. Every biopic has impressed the audience and has also pacified the critics. For those who are familiar with history might know that Maratha military leader Taanaji Malusare was in Shivaji’s army and was also his childhood friend.

Ajay Devgn will soon be seen playing the lead role in Taanaji Malusare’s Bollywood biopic titled – Taanaji – The Unsung Warrior. The actor unveiled the first poster of the upcoming film through his official Twitter on July 20, 2017.

Ajay captioned the poster, “He fought for his People, his Soil & his King Chhatrapati Shivaji. The unsung warrior of glorious Indian history, Subedar Taanaji Malusare.” Taanaji was known for the success in the battle of Sinhagad, when he conquered the fort of Kondana with the help of his pet, a monitor lizard. The monitor lizard can also be seen on the poster, which has also shown Ajay in a defensive mode.

As the story goes, Taanaji entered the fort, which led to a battle between him and the Mughal fort-keeper Udaybhan Rathod. However, Taanaji died after the battle but is still remembered for his heroic deeds. Taanaji – The Unsung Warrior is being directed by Om Raut and is co-produced by Viacom 18 Motion Pictures. The film is expected to release in 2019.

On the work front, Ajay Devgn was last seen in the film Shivaay. He is currently gearing up for the release of Baadshaho and Golmaan Again. While Baadshaho is set at the backdrop of the emergency period in India during the 70s. Golmaal Again is the comedy film by Rohit Shetty and is the fourth installment of the popular Golmaal series. The film also stars Tusshar Kapoor, Shreyas Talpade, Arshad Warsi, Neil Nitin Mukesh, Tabu and Parineeti Chopra. Golmaal Again releases on October 20, 2017.