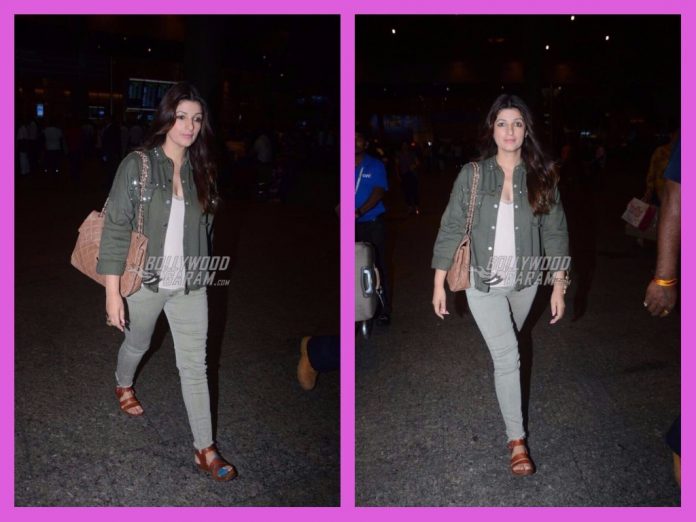 Twinkle Khanna, might be away from Bollywood, but is constantly on toes either with children or on a holiday with friends. The actress was photographed at the Mumbai airport as she returned from a European trip on July 23, 2017. Despite a long journey, Twinkle managed to looked fresh and was all smiles as she was photographed by the shutterbugs.

Twinkle was seen in a white top, a pair of denims and a green jacket with a brown bag to match with. However, her flight back did not seem to be pleasant as she encountered a passenger with a smelly feet and also found a way to deal with it. The actress who is also known as Mrs. Funnybones narrated the incident through her Tweets and wrote, “Polite way of telling fellow passenger about the two dead toads in his socks, chemical weapons capable of decimating nations? Choking at 30,000 feet.”

Twinkle added, “I did and she sniffed around, sympathetically nodded and when he fell asleep she surreptitiously sprayed his smelly feet with perfume!” On the other hand, son Aarav is in Oxford for a two-week study course and Akshay Kumar is busy looking after daughter Nitara while simultaneously shooting for the upcoming film Gold. The actor recently confessed that looking after a little girl is a tough job and appreciated wife Twinkle for managing children, home and work with so much ease and dedication while remaining calm for most of the days.