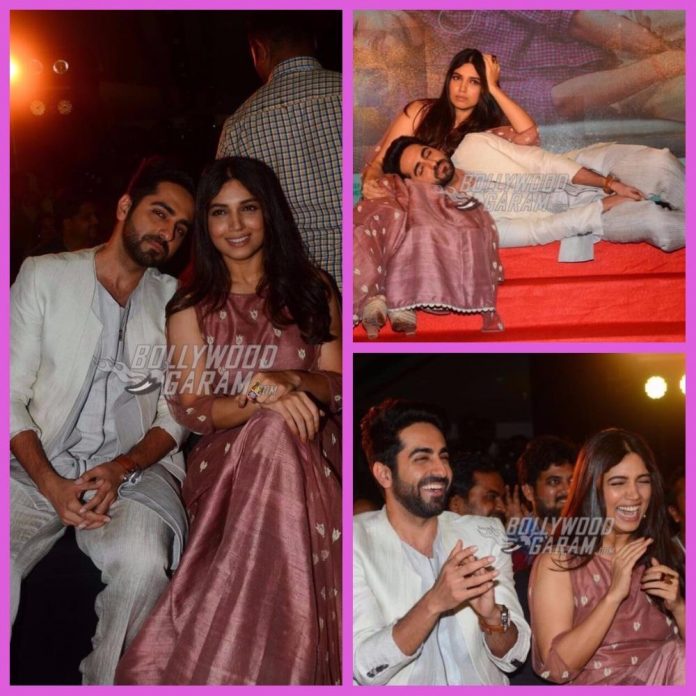 Lead actors Ayushmann Khurrana and Bhumi Pednekar launched the trailer of their upcoming film Shubh Mangal Savdhan at an event in Mumbai on August 1, 2017. After showing off some amazing chemistry in the film Dum Laga Ke Haisha, Ayushmann and Bhumi are ready to entertain the audience once again.

The upcoming film is the remake of the Tamil film Kalyana Samayal Saadham and is directed by R.S.Prasanna. The Hindi version of the Tamil film also stars Brijendra Kala and Shubhankar Tripathi. The makers had earlier teased the theme of the story with a video and then Ayushmann dropped the trailer on August 1, 2017.

Producer Anand L. Rai during the event said, “The story is based on middle class family, and we are belongs to middle class family. So I think the conservative words middle is very touch to my heart. So that why I think to made this films.” Bhumi, who made her debut in movies with the film Dum Laga Ke Haisha, looked pretty in a pink outfit while Ayushmann was seen in a white outfit.

The actress had put on a lot of weight for her first film, but managed to shed the extra weight gradually. The chemistry in the film had won the hearts of the audience and this time it will be interesting to see what new the makers have brought in the upcoming Bollywood drama. Bhumi will also be seen in the upcoming film Toilet: Ek Prem Katha which is ready to be released in theatres on August 11, 2017. Shubh Mangal Savdhan has been scheduled for a release on September 1, 2017