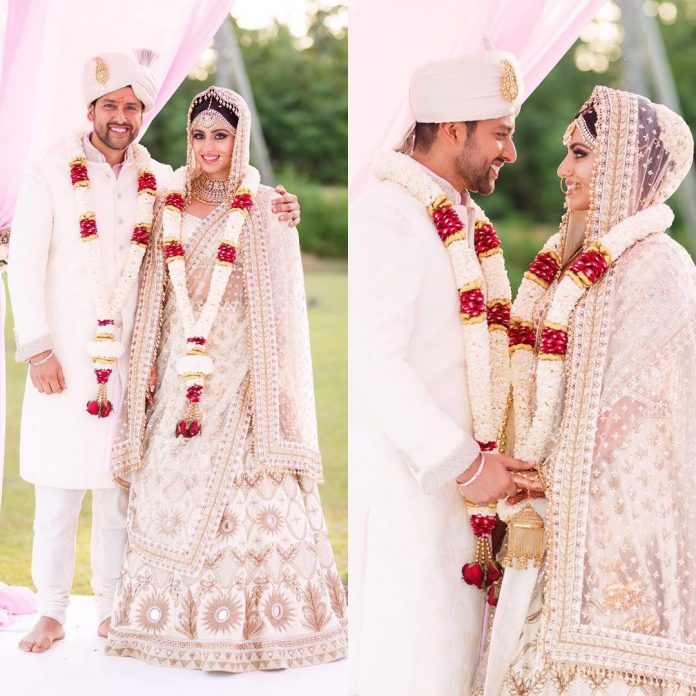 Actor Aftab Shivdasani had a hush-hush wedding back in 2014 with Nin Dusanj. However, after three years, the two got married again and this time in a lavish wedding ceremony in Sri Lanka.

Pictures surfaced online have shown the beautiful couple in pink co-ordinated outfits. The wedding was attended by just a few close friends and immediate family members. The celebrations resembled a big fat destination wedding where Aftab arrived to the venue on an elephant and Nin arrived in a Doli.

The wedding took place in a span of two days with a Mehendi ceremony on the first day and a Hindu ceremony on the second day when a pundit was flown from Mumbai to conduct the rituals, which was followed by Buddhist blessings by the local Sri Lankan monks. The groom looked dapper in a white sherwani with pink collars while Nin made a gorgeous bride in an ivory color lehenga with plenty of gold embroidery and kundan jewellery.

Guests for the wedding were flown to Sri Lanka to attend the ceremonies. The couple recently celebrated their third wedding anniversary and Aftab took to his social media account and wrote, “Happy third Anniversary my beloved, thank you for the best three years of my life so far. #bliss #celestial #love #twinflame.” On the work front, Aftab Shivdasani was last seen in the film Great Grand Masti and is currently filming for a Tamil film.