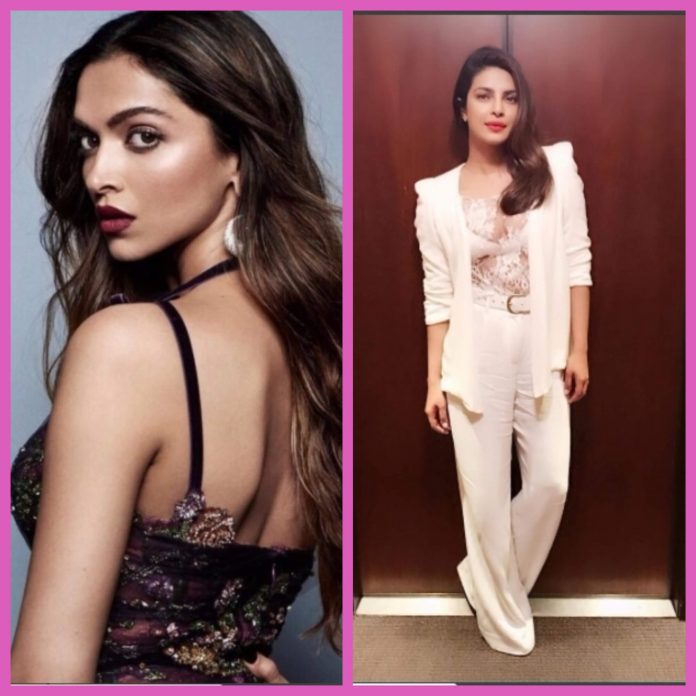 Deepika Padukone who has just reportedly wrapped her upcoming movie, Sanjay Leela Bhansali’s Padmavati alongside actors Ranveer Singh and Shahid Kapoor, has been ranked as Bollywood’s highest paid actresses by the Forbes magazine at the sixth position with total amassed wealth of 11 million dollars. At a close seventh is Hollywood’s popular face and B-town’s established actress, Priyanka Chopra at a total worth of 10 million dollars, listed right next to Ranveer Singh, Deepika’s beau.

While both the Asian beauties have charmed in Hollywood films, Priyanka’s tryst with Hollywood that began with her popular TV series Quantico has now led her to a famed position where she is being offered pivotal roles in Hollywood movies one after the other, from Baywatch that released a couple of months back this year to her upcoming flicks, Isn’t It Romantic and A Kid Like Jake. Deepika, meanwhile has so far only starred in the Hollywood film, XXX: The Return of Xander Cage opposite ace actor Vin Diesel who is mostly known for his role in the Fast and Furious series.

Padukone and Chopra not only feature among the top ten in the list but they are the only Bollywood actresses to have made it to the list alongside successful actors like Aamir Khan, Shah Rukh Khan, Salman Khan and Akshay Kumar. Shah Rukh though tops the list with total earnings of 38 million dollars that he banked over the last year from his movie, Raees, his profitable production ventures under Red Chillies Entertainment and his various ad endorsement deals, reports Forbes.

Salman follows Shah Rukh closely at the second position and with total wealth of about 37 million dollars, amassing his profits from the box office collections of Sultan, his line of clothing and accessories at Being Human Foundation and his lucrative endorsement deals.

While Shah Rukh did not fare well at the box office over the past few movies in the last couple of months, whether it be Fan, Dilwale or Jab Harry Met Sejal; he certainly proved to be the Baadshah who broke the bank. Akshay, on the other hand, has had a slew of box office hits from Rustom to Jolly LLB 2 to Naam Shabana and most recently Toilet: Ek Prem Katha and has made it to the list at number three, garnering 35.5 million dollars from June 2016-June 2017.

Forbes’ list of Bollywood’ highest paid actors records Aamir at fourth and Hrithik Roshan at fifth spots as they amass 12.5 million dollars and 11.5 million dollars’ worth collections, owing mostly to their box office hits(who can forget Aamir’s record-breaking grosser, Dangal that is still running high on box office collections overseas?). Going by Forbes’ report, Bollywood’s famed perfectionist could have easily made it to the top 20 in world’s highest paid actors list, had he been active with ad endorsements and more films per year.

Deepika, meanwhile has been reported to have earned more than her male co-stars in Padmavati and could safely be claimed to be India’s top-paid actress. Though Deepika and Priyanka have made the pay scenario for Indian female stars more optimistic, Bollywood and its issue of gender wage gap still have a long way to go.