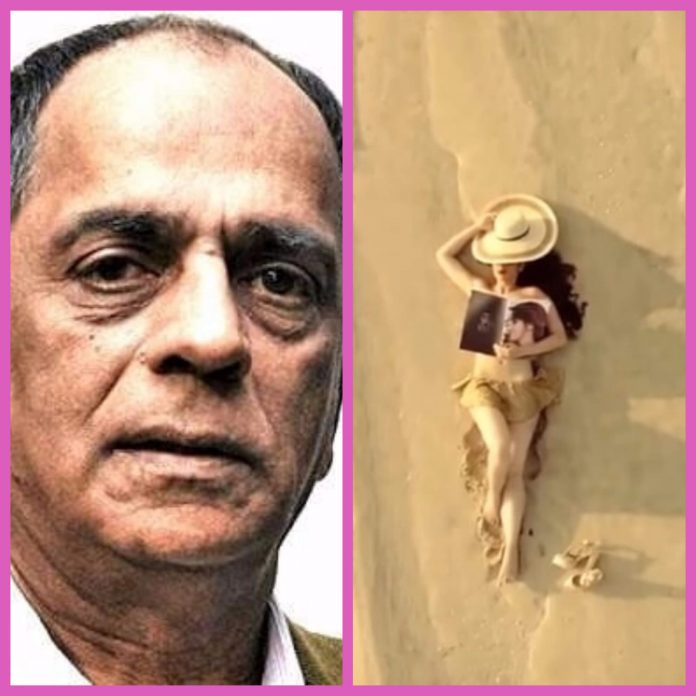 When one raises objection to using the word “intercourse” or some cuss words in a film, or even has issues with Indian audience viewing a kiss shown in a Hollywood movie on the 70 mm screen, and yet reportedly presents “the bold, beautiful and blessed” Julie 2 without any cuts, nothing can be more ironical and troll-worthy.

For the uninitiated, Pahlaj Nihalani, the producer for several films like Andaz (had a controversial song on erection), Haathkadi, First Love Letter and Aankhein (had sexually suggestive scenes and dialogues) had been the Chairman of Central Board of Film Certification (CBFC) under the Information and Broadcasting Ministry (I &B) of India for a period of two years until he was removed from his job last month.

He is the man with the most scandalous tenure as the CBFC chief and is behind statements that say movies like Omkara and Gangs of Wasseypur should not have been allowed to be released, only because the actors in the movies used cuss words. Nihalani said that cuss words are not a part of people’s daily affairs and hence the movies with cuss words should not be approved, at least not without significant cuts. He even went ahead with a list of words that should not be used in films – the list even went abuzz online.

A film based on homosexuality called Unfreedom was not released owing to Nihalani’s statements that claimed that the movie will cause Hindu-Muslim riots and might even ‘ignite unnatural passion.’ However, Mastizaade and Kya Kool Hain Hum 3 even with evident vulgarity in their trailers went ahead with release back in December 2015. Going by the reports, Nihalani then maintained in front of I & B ministry that he took the decision to release these movies only to clear the air about CBFC’s sanskaari image. The producer-turned CBFC chief never failed to make headlines with his constant controversial statements and actions from January 2015 to August 2017 when he was removed from his Censor Board position and replaced by lyricist, marketing maven and screenwriter, Prasoon Joshi.

He has taken digs at filmmakers, veteran actors, films released in the past, nudity on screen, films on LGBTQ rights, films on unconventional relationships and even the ones showing actors drinking alcohol on the silver screen. From seven cuts in Ryan Reynolds’ Deadpool to giving ‘A’ certificate to a romantic musical like La La Land to defying certifying Haraamkhor as it talked about a teacher-student relationship in an unlikely way and dictating 89 cuts in Udta Punjab, apart from asking to remove Punjab from the title. Lipstick Under My Burkha has been one among the latest films that struggled for a release in India (as it was too “lady-oriented film”) even though it premiered at the Tokyo and Mumbai Film Festivals and even won the Spirit of Asia prize and Oxfam Award for being the Best Film on Gender Equality.

Turning the tables, the supposedly ‘sanskaari guru’ is back with a bold move in less than a month after being ousted from CBFC. Nihalani will reportedly be presenting Julie 2, a Raai Laxmi starrer and a sequel to Julie released in 2004 with Neha Dhupia in the lead.

The director of Julie 2, Deepak Shivadasani was quoted saying by a leading daily, “It’s a content-driven film and Pahlaj ji had no objections to any of the scenes,” adding that, Nihalani, who is family to him had loved the script of Julie 2 when he discussed it back in 2012 and decided to present the film after watching its screening with his wife.

The daily quoted Nihalani too about his decision to present Julie 2, who said, “Julie 2 should be given an ‘A’ certificate without any cuts. There is no vulgarity, obscenity or even a language problem,” further claiming that “My family loved Julie 2, it’s a bold thriller about how talented people come into the industry and then are forced to compromise. It’s a good expose with a message for aspiring actors who come from across the country and don’t get the right people or platform.”

If CBFC cuts scenes from this film, it will be karma for #PahlajNihalani pic.twitter.com/shvhfRYpXW

Seems like Pahlaj Nihalani is ’bout to get the taste of his own medicine ?#Julie2 pic.twitter.com/cjqvMevnR6

Pahlaj Nihalani already had a scar on his reputation. Now he’s getting us some sun too.
Mission sunscar complete. pic.twitter.com/ihp7nCQ63z

Watch the Julie 2 official trailer here that will hit the theatres on October 6, 2017.