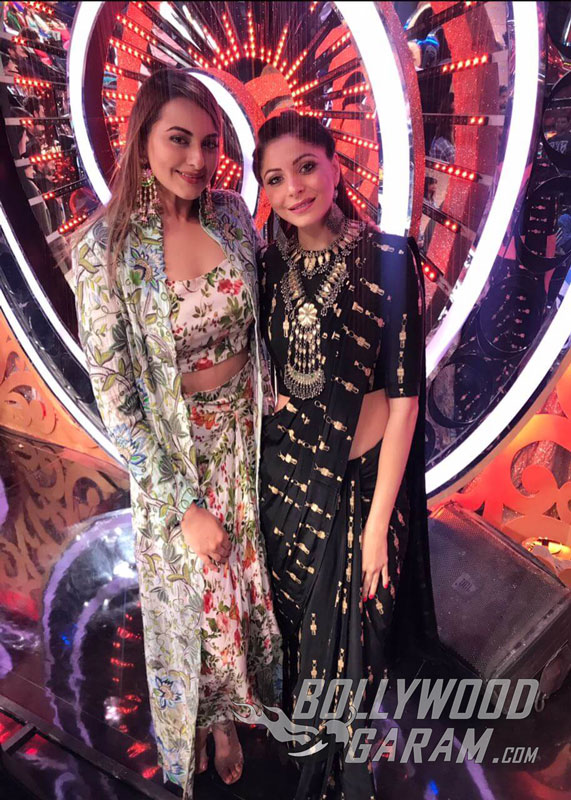 Popular B-town playback singer, Kanika Kapoor dazzled in a black Masaba Gupta designer sari on her bhajan reality show, Om Shanti Om where she is one of the judges. The show airs on the newly launched Star Bharat channel. Kapoor was spotted posing for the shutterbugs with her co-judge on the musical reality show, Sonakshi Sinha where the latter was wearing a floral print outfit with matching danglers. Kapoor’s heavy golden jewellery was in tandem with her beautiful black sari with golden prints all over it.

The show, Om Shanti Om premiered on August 28, 2017 on the Indian television also witnessed Baba Ramdev, a yoga guru and Patanjali group founder as one of the judges on the show that features contestants singing only bhajans or devotional songs and are called divine voices on the show. The judges viz. Kanika Kapoor, Sonakshi Sinha and music director Shekhar Ravjiani start off their introductions with aartis while they reportedly wear intense spiritual expressions.

Actor Ranveer Singh had been the first guest on the show while TV actress, Mouni Roy and rapper Baadshah presented the first guest performances. Kapoor, Sinha and Ravjiani are called the Guru Cools and they are shown sitting on music asanas while judging the show.

Music composer Shankar Mahadevan reportedly believes that singing in the show Om shanti Om brings the contestants close to the Indian culture and heritage. He will be seen as a guest on the show soon and shared his excitement in a statement: “I am really honoured to be a part of ‘Om Shanti Om’ as a special guest. There have been many music reality shows on Indian television, but ‘Om Shanti Om’ is fresh and unique in all aspects. The show is going to bring the young generation closer to our heritage and culture.”

Meanwhile, Kapoor has begun enticing the audiences with her chic attires, elegant dressing and donning the traditional avatar like a boss.