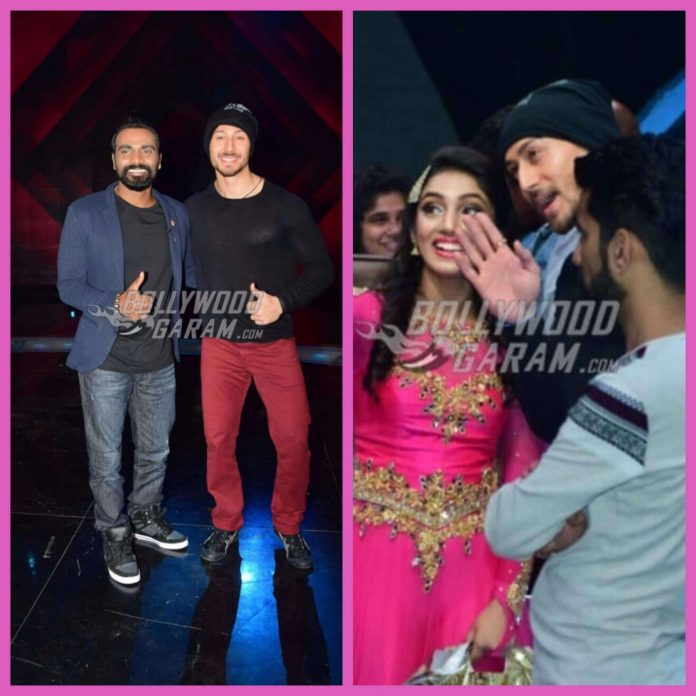 Tiger Shroff has been on a promotional spree for his movies, first Munna Michael and now Baaghi 2– he had a good time with contestants on a dance reality show  while promoting Baaghi 2

Bollywood actor Tiger Shroff has established his place in the tinsel town especially as a flexible dancer whose physique and dancing skills many youngsters seem to rave about. The Flying Jatt actor attended the dance reality show, Dance Plus 3 aired on Star Plus on Sunday, September 10, 2017 as a guest judge along with Disha Patani, his rumoured girlfriend and his co-star in an upcoming movie Baaghi 2 helmed by Ahmed Khan, a movie that the two are currently filming along with Prateik Babbar.

He was seen wearing a black full-sleeved t-shirt with bright red pants and a headgear, sporting quite the cool style statement. Shroff showed his flexible side even on the show stage as he was seen shaking a leg and posing for selfies with the contestants. The Munna Michael star was at the show for Baaghi 2 promotions and was seen enjoying the dance show adding some of his own cool moves to them while on the stage.

Meanwhile, her Munna Michael co-star Nidhhi Agerwal praised Shroff and was quoted saying by a leading daily, “I know some actors are very selfish and they want their face on the camera and their heroine’s back and they do a lot of petty things to screw other actor’s screen space. But, Tiger is not like that. He takes you with him. So, I never had this fear while working with him.” She also added that Shroff supported her on the set as she is a budding actor and helped her face the challenges while filming when she was “lost and clueless.”

Munna Michael has been created as a tribute to the late legendary pop icon Michael Jackson and Shroff reportedly went ahead with tribute events on the World Music Day in Pune for promoting the movie. However, the sensational dancer’s action sequences and dance moves could not save the movie from falling flat at the box office.

Shroff’s Bollywood career and his popularity among masses, though, is growing by the day and he was recently roped in as the co-owner and brand ambassador of Krystal Mumbai Warriors for the Premier Futsal Season 2 along with other star attractions like Rana Daggubati (of Baahubali fame), Sunny Leone and Arya, an actor and producer for Tamil films and Malyalam productions.

Previously, Shraddha Kapoor (who has co-starred with Shroff in Baaghi and A Flying Jatt), Siddhant Kapoor and Ankur Bhatia attended the Dance Plus 3 show for promoting their soon-to-release movie, Haseena Parkar.

Exclusive photos of Tiger Shroff at the dance reality show!