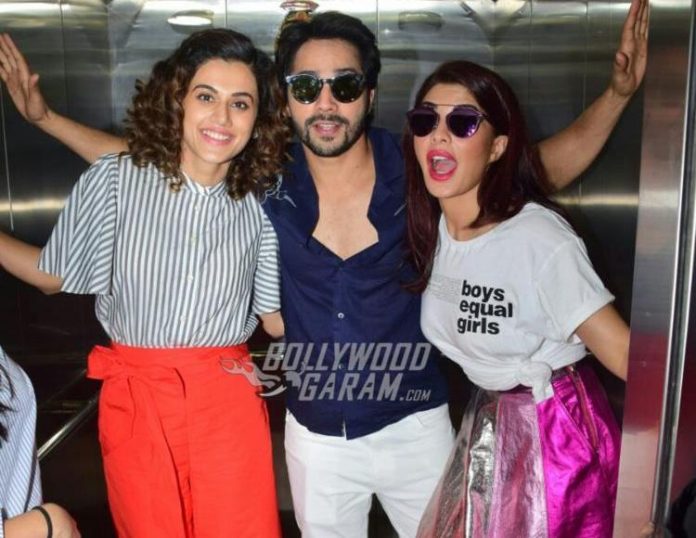 Just like their unique trailer launch event, Judwaa 2 team trio finds an exclusive and ultimate spot for their movie promotions

Varun Dhawan returned to Mumbai from Budapest and has already got back to promotions of his upcoming film Judwaa 2 with his co-stars Taapsee Pannu and Jacqueline Fernandez. The jovial trio was snapped in Mumbai as they promoted their film in the most unique way on September 14, 2017. Jacqueline, Varun and Taapsee looked happy and excited as they posed in an elevator to promote the revised version of the song Oonchi Hai Building… Lift Teri Band Hai.

Jacqueline opted for a metallic skirt and a trendy top while Taapsee looked pretty in a striped shirt and orange culottes. Varun looked dapper in a navy blue shirt and white pants with a pair of glares. Taapsee in a recent interview with a leading daily talked about her character in Judwaa 2 and said, “They have revamped the girl’s character [in the film]. My character is not on the lines of either Karisma or Rambha. I play a college girl who studies with Varun Dhawan. I am an Indian girl born and brought up in London.”

Salman who rocked the original film, Judwaa will be seen doing a cameo. The film is ready to be released in theatres on September 29, 2017.

Exclusive photos of Judwaa 2 lead actors during movie promotions in an elevator!