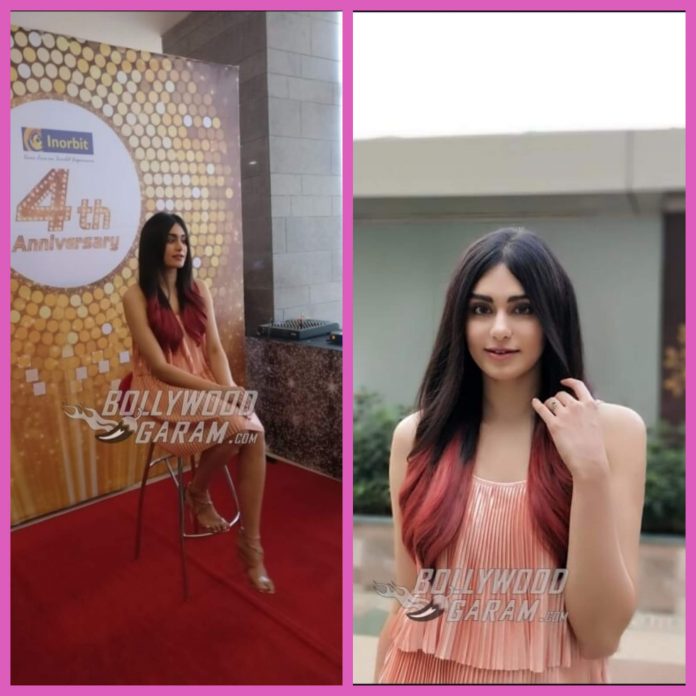 Adah Sharma sported the pretty feminine look in a peach dress at the fourth anniversary celebration of Inorbit, Vadodara

Known widely for her Telegu films and few of her Hindi films, her debut Bollywood movie being a horror film that did well at the box office too, Adah Sharma has already earned the Filmfare Award for Best Female Debut nomination. She was recently snapped at the Inorbit mall’s fourth anniversary in Vadodara, Gujarat as she cut the cake and was seen celebrating the success of the company. Inorbit seemed excited about the prospect when it posted on Twitter about the event and Adah Sharma’s participation in it.

It’s time to celebrate Inorbit Vadodara’s anniversary!? To make it more special, @adah_sharma will join us today?. Do join us! T&C Apply* pic.twitter.com/RkdnO4GgJb

#Adahsharma joins Inorbit Vadodara in celebrating our 4th Anniversary! Thank you all for a memorable journey! pic.twitter.com/xEmrdMoTog

Adah too shared her picture dressed up for the shopping mall’s anniversary party on her social media account:

But he that dares not grasp the thorn, should never crave the rose ? pic.twitter.com/0xoutFgOLS

She was seen wearing a beautiful peach dress with her open red-streaked hair and minimal make-up. The Hasee Toh Phasee actress has acted in several south Indian films and said to a news agency in an earlier interview, “My main concern was to get a film, rest of the process I totally enjoy. For a non-film background person like me, the most important thing was to get a film in the first place. There is no rule book… Once you get the first film, the happiness begins.”

She also added that she feels happy and grateful that the Indian audience had “accepted her even after doing a horror film, adding, “I did everything possible which was required in that genre. Which is why I didn’t sign any other horror movie after that. I will return to it only if it offers me something new which I haven’t done already.”

The young actress is elated to be a part of South Indian cinema, claiming, “I have got a good body of work in South and I am proud of it. That is making people aware of my capabilities.”