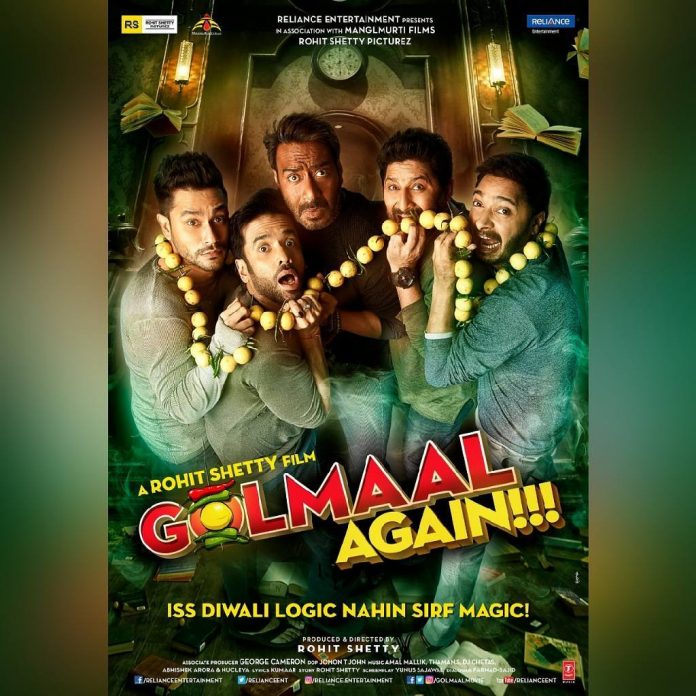 As the upcoming comedy flick Golmaal Again inches towards release, the makers have released a new poster. Filmmaker Rohit Shetty is once again ready to entertain the audience with yet another installment of Golmaal, which has never disappointed the audience. The new poster of the film has hinted a spooky comedy as the lead actors are seen in a stunned look with lemon and chilies wrapped around them.

The poster shows Ajay Devgn, Kunal Khemu, Tusshar Kapoor, Arshad Warsi and Shreyas Talpade with a caption “Iss Diwali Logic Nahi Sirf Magic”. The trailer of the film is ready to be released on September 22, 2017. The fresh installment of the film has new additions with Neil Nitin Mukesh, Tabu and Parineeti Chopra.

Golmaal Again is the fourth installment of the Golmaal series and will also mark the tenth collaboration of Ajay Devgn and director Rohit Shetty. Kareena Kapoor, who was a part of the earlier two installments of the series, will not be present for the upcoming film. The makers have instead brought in Parineeti Chopra and Tabu. Parineeti had earlier talked about the film and said, “It is amazing to be a part of a film like this. It’s a legacy (to take forward). Golmaal is a legendary series and Kareena has done two of them and now I am doing it. I hope I can do a good job.”

The actress added that she had a great time shooting with the Golmaal team and said, “the film is big, so I am having a fun time with the entire team which has become like a family.” The film is directed by Rohit Shetty and produced by Sangeeta Ahir and Rohit Shetty. The upcoming comedy flick has all the stars on board who have earlier tickled the funny bones of the audience. The film is ready to be released in theatres on October 20, 2017. Watch this space for the official trailer of Golmaal Again.