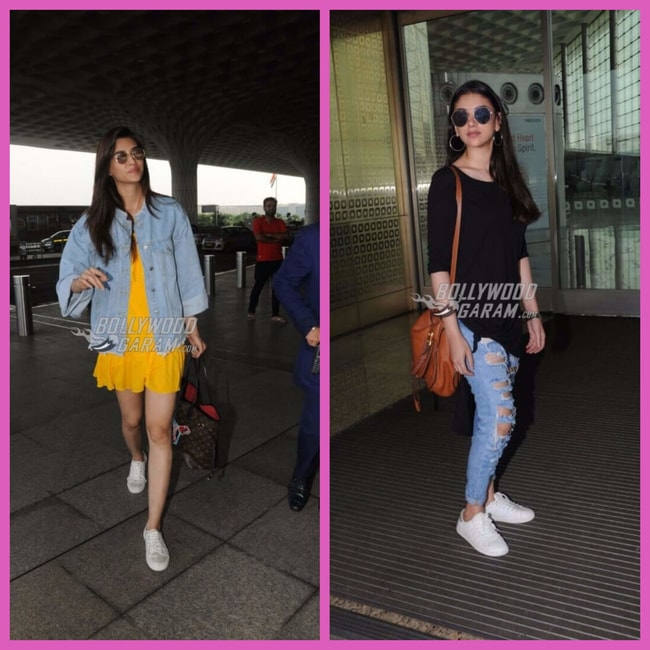 Bollywood’s fresh faces, Kriti Sanon and Aditi Rao Hydari have been enjoying their Bollywood journey and were seen at Mumbai airport on September 21, 2017 making style statements with their attires while on their respective travel schedules.

While Kriti looked cool and vibrant in a sunrise yellow dress, white sneakers, a blue denim jacket folded at the wrists and reflective glares, Aditi sported a black tee, ripped denims, white sneakers, a brown bag, hoops and black glares. Both were seen making their way towards the airport entrance. Their fashion statements have never been disappointing and it is fun to see two style divas give out travel fashion goals.

Aditi has also acted in some Tamil films apart from her Hindi films which have garnered critical acclaims. However, her Bollywood movie in different genres have made the audiences and the filmmakers sit up and take notice of her. From a musical romance like Rockstar, horror film Murder 3, a romantic comedy like Khoobsurat, a matured thriller like Wazir and a drama film like Fitoor, Aditi has had a decent breakthrough in her roles and enjoyed success so far.

Kriti too has a few Bollywood films to her credit like Heropanti, Dilwale, Raabta with Sushant Singh Rajput and her latest flick, Bareilly Ki Barfi with Ayushmann Khurana and Rajkummar Rao apart from her Telugu films like a psychological thriller, Nenokkadine. The Raabta star has also been a model for well-known designers like Ritu Beri and Suneet Varma and has endorsed famous brands as well.

In a recent interview to a news agency, Kriti talked about her last film, Bareilly Ki Barfi and her role as Bitti in the film, “I think the response (to my de-glam role has been) great, and it’s something I was looking for. It takes one person to believe in you and believe in the actor in you rather than the person they see on screen, where you’re playing a glamorous role and urban roles.”

She further added that the industry insiders and audiences have liked the movie and will see her differently now after the movie: “They have liked me in a new light and a lot of messages that I got from friends, family and industry members, said it’s my best performance. Also, a lot of people did not expect me to do a character like that… I am glad that people will see me in a different way after Bitti’s character in Bareilly Ki Barfi.”

Aditi, meanwhile, has her latest movie Bhoomi released on September 22, 2017 for which she has been up and about with the promotions. She is also filming for Sanjay Leela Bhansali’s Padmavati where Deepika Padukone plays Rani Padmavati. The first look of the magnum-opus was revealed on social media on September 21, 2017.

Exclusive photos of Kriti Sanon and Aditi Rao Hydari at the airport!