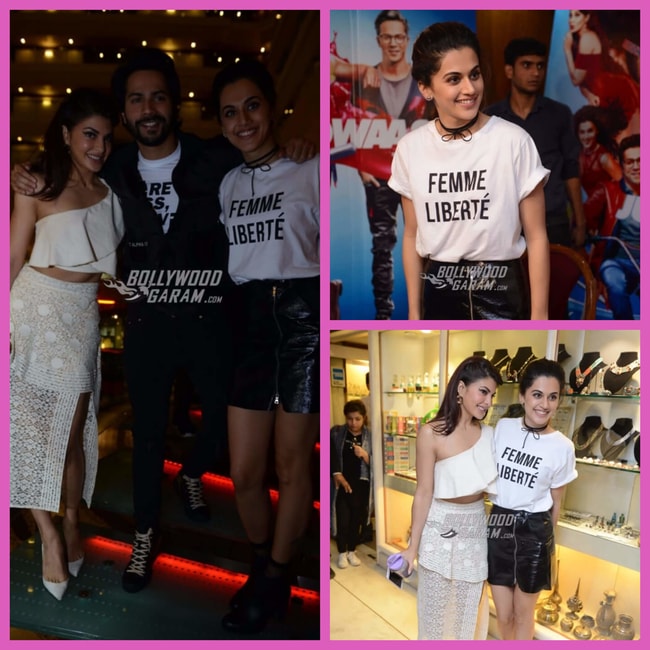 The lead actors of Judwaa 2 have been on a promotional spree since some time now and as the date for the movie release nears (only a day is left to its release), Varun Dhawan, Taapsee Pannu and Jacqueline Fernandez have become ever more active with on-stage performances, promotional tours, promotions on the small screen and more. The trio has now been spotted at Hotel Le Meridien in Delhi where they were seen promoting the film on September 26, 2017, Tuesday.

Varun was snapped wearing a graphic tee with black denims, cool black and yellow sneakers and a matching jacket while Jacqueline looked pretty in an all-white ensemble with beautiful floral pattern embroidery in the skirt with a frontal slit and a silk white one-shoulder crop top teamed up with white pumps and minimal make-up. Taapsee, on the other hand, looked sporty in her white top and dazzling black zipper shorts and ankle-length boots. Taapsee and Jacqueline shot for several poses together, all smiles for the cameras and later joined Varun when they were again snapped by the paparazzi.

Judwaa 2 is the remake of original Salman Khan-starrer Judwaa released in 1997 with Rambha and Karisma Kapoor in the lead. Eight films old in Bollywood, Varun is now to enact Salman in the remake and will be seen in the double roles of long-lost brothers, Raja and Prem.

Varun was quoted saying to Firstpost ahead of his film’s release, “Judwaa 2 is a very ‘today’ film. It felt like a completely new film for me. I saw my dad concentrate a lot more on storytelling, on relationships like recreating the Nandu and Raja friendship. The experience of working with dad once again was novel and unique for me (Main Tera Hero was their first opportunity to work together). Mine is a very fresh approach towards both the characters and I have played them in my own way. Story, screenplay, dialogues, circumstances — everything has changed in this reboot.”