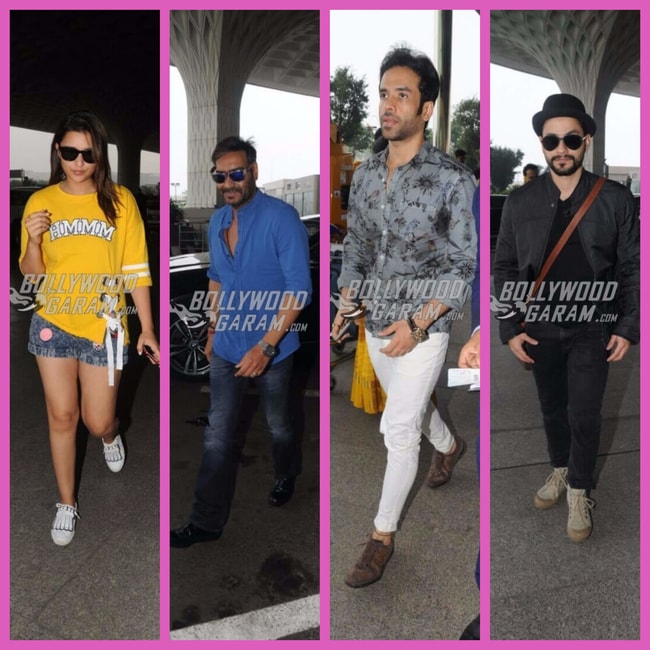 As the upcoming film, Golmaal Again inches towards its much-awaited release, the lead actors of the film, Parineeti Chopra, Tushaar Kapoor, Kunal Kemmu and Ajay Devgn are all off to Delhi for their upcoming film, Golmaal Again’s promotions. While Ajay was spotted in a short blue kurta with denims, black shoes and reflective eyewear, Tushaar was spotted in a printed grey shirt with white distressed denims.

New father, Kunal sported a casual all-black ensemble and seen wearing a black t-shirt with plain black denims, a black leather jacket, black hat with a brown sling bag worn around his shoulder and teaming it all up with double-toned beige sneakers. Kunal who has been blessed with a baby daughter last month whom he and his wife, Soha Ali Khan have named Inaaya Naumi Kemmu completed the sporty look with black round glares.

Parineeti, meanwhile, chose a bright, vibrant and vivacious ensemble to make a cool style statement at the airport while the entire team preps up for the film Golmaal Again’s release around Diwali on October 20, 2017. The Hasee Toh Phasee actress was seen in a graphic yellow jersey with white laces in the front and a Donald duck face at the back of the jersey paired with grey shorts and white sneakers at the airport. She was snapped as she got out of her car and made her way towards the airport, walking in style with her stylish black sunglasses and pink glossed lips.

The Golmaal Again team has recently been seen promoting their film on almost all probable platforms  – they have been seen on the small screen on the sets of laughter shows like The Great Indian Laughter Challenge, The Drama Company and even the newly started Bigg Boss season 11. This weekend the film’s director, Rohit Shetty, Parineeti, Shreyas Talpade, Arshad Warsi, Tushaar Kapoor and Kunal Kemmu were seen promoting the fourth installment of the Golmaal franchise on the sets of the show, Aunty Boli Lagao Boli hosted by a popular personality in the entertainment industry, Archana Puran Singh. The show also had actress-turned-entrepreneur Shilpa Shetty and her husband Raj Kundra at the game show.

Golmaal Again is slated to release in theatres on October 20, 2017.

Exclusive photos of Team Golmaal Again at the airport!