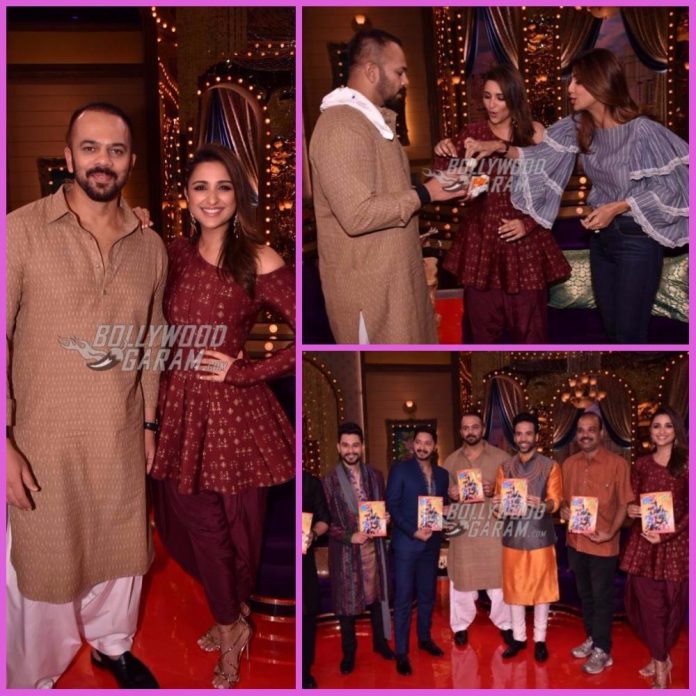 Diwali is here and so is the release of the much-awaited film, Golmaal Again. The lead actors along with director Rohit Shetty landed on sets of the show, Aunty Boli Lagao Boli, for promotions of the film on October 15, 2017. Ajay Devgn, Parineeti Chopra, Shreyas Talpade, Arshad Warsi, Kunal Kemmu and Tusshar Kapoor promoted their upcoming film on the sets of the show hosted by Archana Puran Singh.

The show also saw the presence of Shilpa Shetty and Raj Kundra who have conceptualized the live game/auction show where the viewers can win a car every week by just placing a bid. The lead actors of Golmaal Again were seen having fun on the sets with Shilpa and the host Archana. Arshad Warsi, Kunal Kemmu, Rohit and Tusshar went the traditional way while Shreyas Talpade opted for a formal suit.

Parineeti gave a traditional twist to a skater dress with Patiala pants and gold stilettos. Actress-turned-entrepreneur Shilpa looked pretty in a striped top with ruffled sleeves and denims with heeled pumps. Shilpa and Parineeti were snapped sharing a fun moment with director Rohit Shetty during the promotional event.

The actresses were seen gorging on some rasgullas while Rohit looked amused. The upcoming Rohit Shetty-helmed film is ready to be released in theatres on October 20, 2017. The film will mark the fourth installment of the Golmaal Franchise. The upcoming franchise has some new additions including Tabu, Parineeti and Neil Nitin Mukesh.