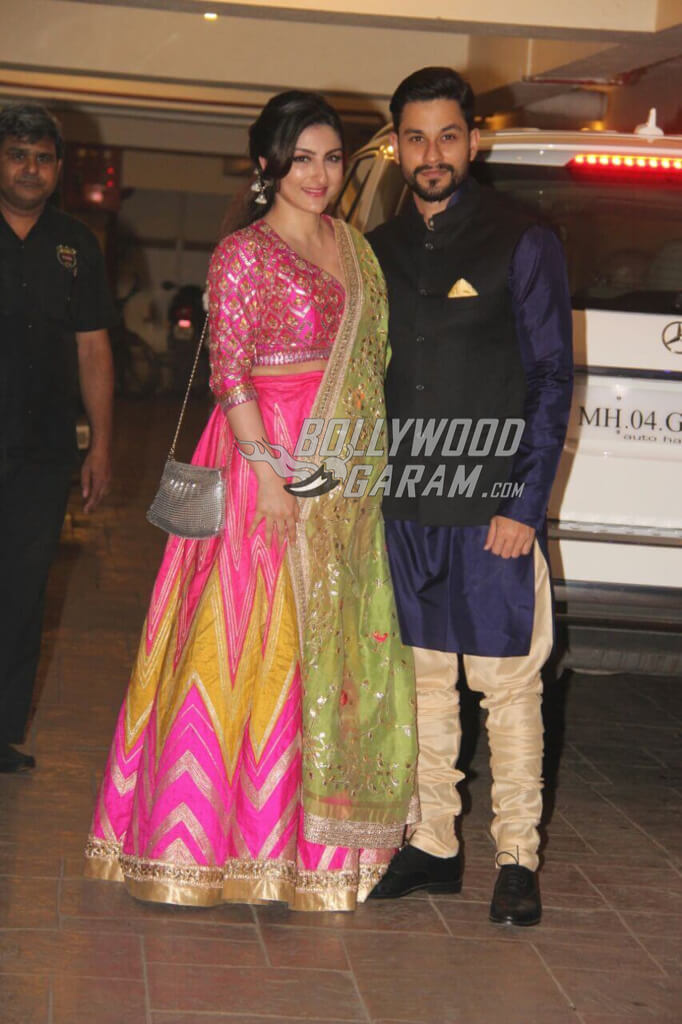 Diwali 2017 has seen Bollywood celebrities celebrating the grand occasion with parties welcoming stars from both the film fraternity and the television industry. Soha Ali Khan and Kunal Kemmu celebrated theirs with family

Diwali is a grand occasion for Bollywood celebrities as they are busy attending and hosting parties and pujas during this auspicious occasion and are seen in a festive spirit as they are dressed in best ethnic looks and outfits and also make the best of arrangements for pujas and parties, that is attended by Bollywood biggies. New parents, Soha Ali Khan and husband Kunal Kemmu were seen attending Diwali puja at Soha’s brother, Saif Ali Khan and wife Kareena Kapoor’s residence, dressed in bright and beautiful traditional wears on October 19, 2017.

While Soha Ali Khan was dressed in a pink, yellow and golden lehenga with a minty green dupatta and carried a silver sling bag, Kunal looked dapper in a navy blue silk kurta and beige churidaar with a black waistcoat and black shoes. Soha completed her look with pink lips, silver jhumkas and looked radiant in the beautifully styled and well-matched attire, adding a smile to go with the festive look. The couple was snapped outside Kareena Kapoor and Saif Ali Khan’s residence where they arrived for the Lakshmi puja that is organized especially on the Diwali day.

In Golmaal 3, Kareena Kapoor had starred in a lead role along with Kunal, Ajay Devgn, Tushaar Kapoor, Arshad Warsi and others. However, the Jab We Met actress will now make a comeback after her maternal break with Rhea Kapoor’s production venture, Veere Di Wedding that also stars Sonam Kapoor and Swara Bhaskar in the lead roles.

Meanwhile, Soha and Kunal welcomed their daughter, Inaaya Naumi Kemmu on September 29, 2017 on the day of Navami that is considered yet another auspicious day.

A happy and colourful Diwali In @aditisomani_india and @firdausjewels So happy to have you back @neha.bijlaney !!

Happy Diwali to all – may the light dispel the darkness and bring you joy, peace and love ❤️#happydiwali #diwali2017 #family #shotoniphone8plus