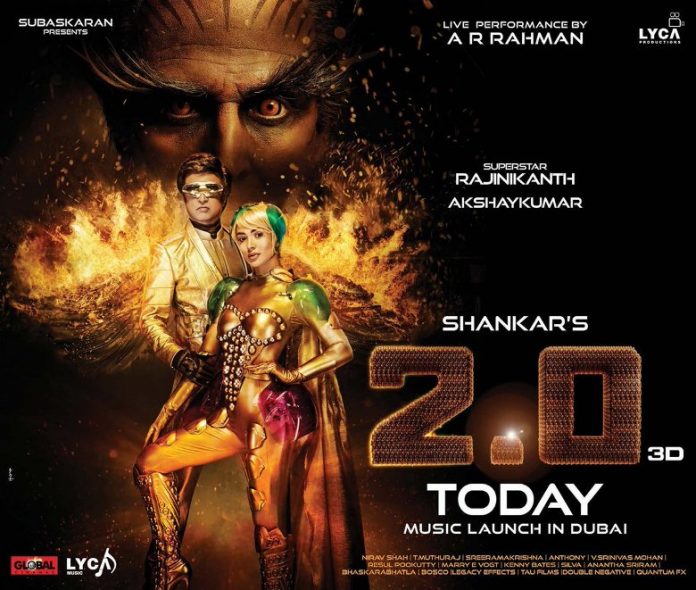 After much waiting, Rajnikanth’s 2.0 has a new poster now and the audio launch of the film will witness a grand event

Fans of Rajinikanth can rejoice as a new poster of the much awaited film 2.0 has been released. The music of the film will be launched at an event in Dubai on October 27, 2017. The poster has shown the veteran star as Chitti with gorgeous Amy Jackson looking gorgeous in a golden outfit. The backdrop of the poster can see Akshay Kumar with a crow look.

The poster has surely increased the curiosity of the fans. The upcoming film 2.0 is directed by S Shankar and is a sequel to the blockbuster film Enthiran. The sci-fi thriller flick will be one of the most expensive films made in recent times. If things falls in place, the film will be released in January 2018.

The audio launch is expected to be a grand event where the Telugu segment will be hosted by Rana Daggubati while the Tamil segment will be handled by RJ Balaji. Tamil star Kamal Haasan is expected be the chief guests for the event. The makers of the film have planned to broadcast the entire event in malls. With the music by A.R.Rahman, the fans are indeed excited to know what is in store for the music lovers.

The film is expected to be released in 15 languages.
Photo Credits: Twitter