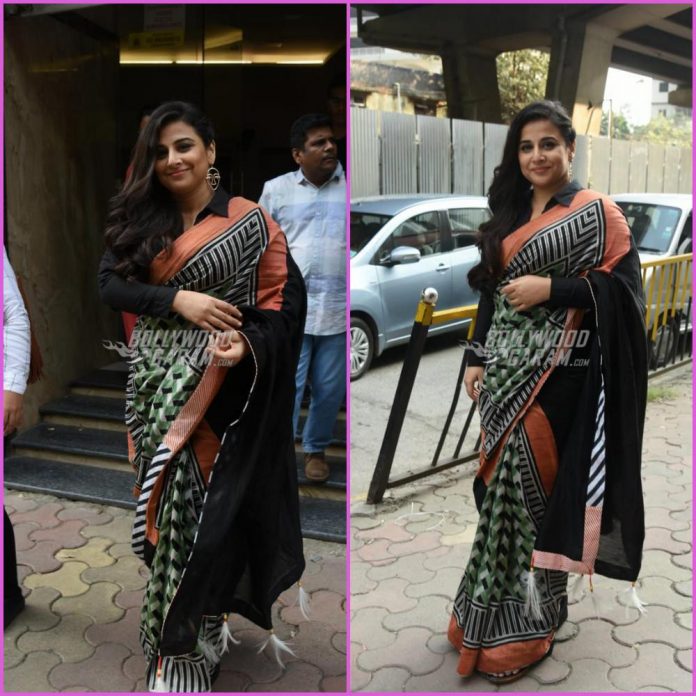 Vidya Balan looked like a breath of fresh air as she promoted her upcoming film Tumhari Sulu in Mumbai on October 30, 2017. The Begum Jaan actress, who will be seen playing the role of a middle class woman, was seen wearing black printed sari and was all smiles for the cameras.

The upcoming comedy-drama is directed by Suresh Triveni and also stars Manav Kaul and Neha Dhupia. Vidya was last seen in the film Begum Jaan, in which she played the role of the ‘madam’ of a brothel. Her role in Tumhari Sulu is completely different from her earlier role as she will be seen playing the role of a housewife, who lands a job of a night radio jockey.

Vidya Balan during an interview with a leading daily talked about her experience of filming and said, “I definitely know that I’ve not had fun on the screen for a while. I’ve been playing very intense and heavy characters, and after a long time, I got to play this character, who is always smiling, laughing and making people laugh. I do think it is precious to make people smile and laugh, and if a film is able to do that, it is amazing. I was definitely missing that in my life”. It will be interesting for the audience to see Vidya play a completely different role.

The makers of the film have also revamped the song, Hawa Hawaii from the film Mr. India. Tumhari Sulu is ready to be released in theatres on November 17, 2017.