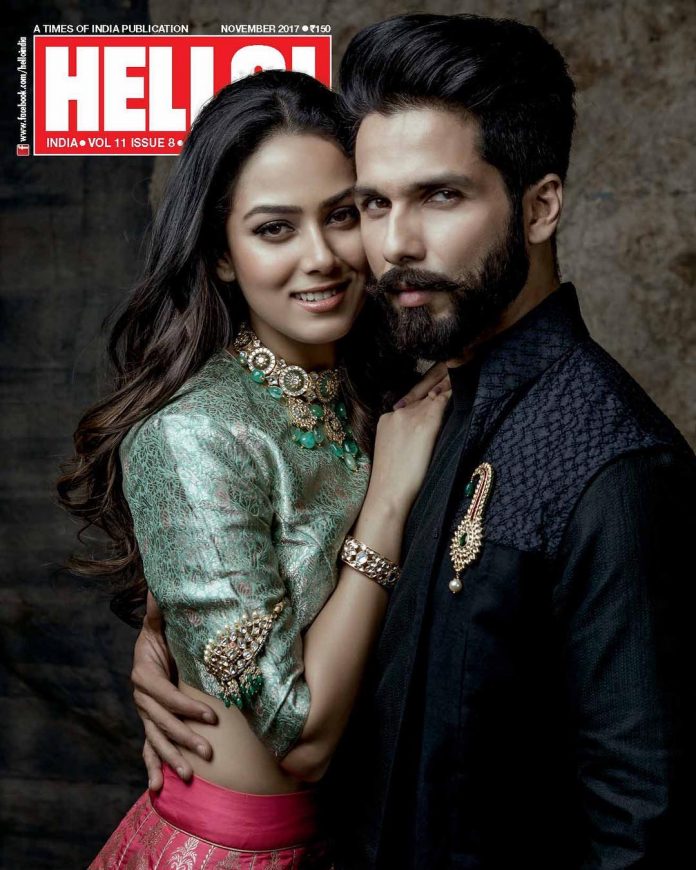 Bollywood couple, Shahid Kapoor and Mira Rajput have been in news since the time they got married. Shahid opted for an arranged marriage, but soon Mira managed to win the hearts of his fan base and became equally popular. The hot couple has now featured on the cover of the Hello Magazine of the November 2017 issue. This is their first official magazine cover together and they look absolutely gorgeous together.

Shahid can be seen in an ethnic outfit in a killer look and holding Mira close to him. Mira looks stunning in an ethnic outfit with a gentle smile as she leans on Shahid. The Rangoon star wore a raw silk kurta by Anita Dongre while Mira was seen in a pink lehenga skirt and a pistachio green blouse from Raw Mango. Mira’s look for the cover was completed with soft curls and a gentle smile.

The November issue of Hello Magazine has talked about the relationship between Shahid and Mira. The cover has mentioned that they are falling more in love with every passing day. The Jab We Met actor, a while back, had also shared a picture from the photo shoot of the issue on Instagram. The picture showed the two holding King and Queen playing cards. Shahid gave an interesting caption to the image saying, “The queen that rules my heart.”

Mira Rajput and Shahid Kapoor got married on July 7, 2015 in an intimate wedding ceremony which was attended by just a few friends and family members. The couple was blessed with a baby girl in August 2016. Their daughter Misha has already become popular among the paparazzi. On the work front, Shahid is looking forward to the upcoming film, Padmavati helmed by Sanjay Leela Bhansali. The film also stars Ranveer Singh and Deepika Padukone and is ready to be released in theatres on December 1, 2017.