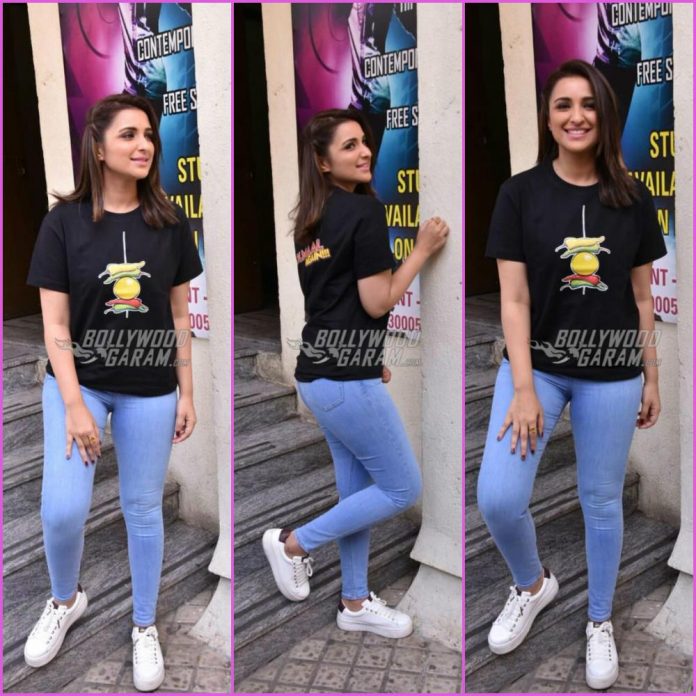 Parineeti Chopra marked her debut in the Golmaal franchise with Golmaal Again. The actress hosted a special screening of the Rohit Shetty-helmed film for the under-privileged children of the Smile Foundation in Mumbai on November 1, 2017.

Parineeti was all poses for the cameras and was seen wearing a black Golmaal Again t-shirt which had lemon and chillies printed on the front and blue denims. The Ishaqzaade actress in every interview has mentioned how happy she was to be associated with the Golmaal team and shared memories of the fun time she had during the shooting days.

The film was released in theatres on October 20, 2017 and is having a successful run at the box office. Golmaal Again also stars Tabu, Ajay Devgn, Kunal Kemmu, Tusshar Kapoor, Arshad Warsi and Shreyas Talpade. The entire team of the franchise are celebrating the success of the film in different ways.

Parineeti Chopra in a recent interview with a leading daily talked about the success of the film and said, “It means a lot to me! I honestly don’t know what to say, I am talking to so many people and they’ve told me how the film broke a lot of records in the first four days of its release. I always used to hear and dream of these things, but I can’t believe that it has happened to my own film.” The actress had also expressed that working with the team was like being on a paid holiday. Filmmaker Rohit Shetty in an earlier interview has also assured that they will surely plan for the next installment of Golmaal. The film also featured Neil Nitin Mukesh, who played a negative role along with Prakash Raj. Veteran actor Nana Patekar did a guest appearance in the film which was enjoyed by the audience.

Exclusive photos of Parineeti Chopra at the special screening of Golmaal Again!