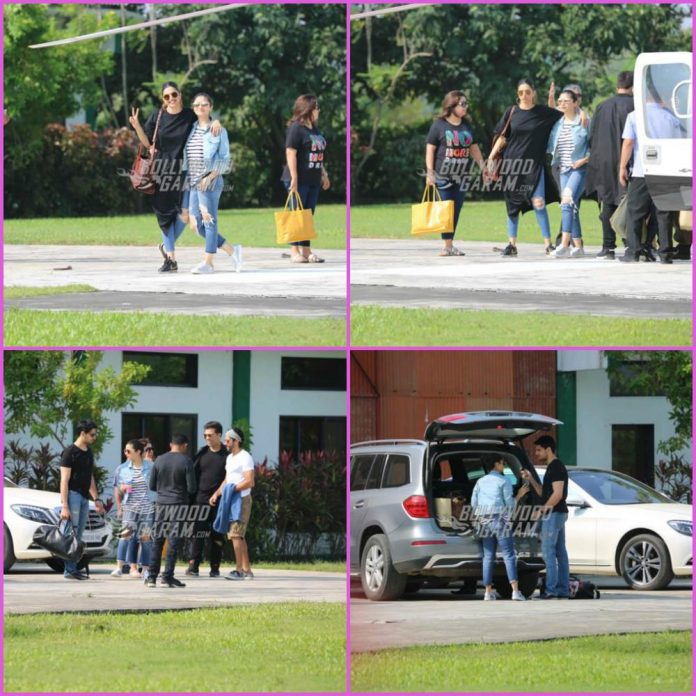 The Khans have indeed planned a big party for Shah Rukh Khan, who is celebrating his 52nd birthday on November 2, 2017. The superstar is at his Alibaug bungalow in Mumbai and the celebrations have begun a day before. Hosts Gauri Khan and Suhana Khan were the first ones to arrive after which friends and colleagues of the star started arriving at the remote abode. Alia Bhatt, Sidharth Malhotra, Deepika Padukone, Farhan Akhtar, Karan Johar and Farah Khan were snapped at the venue in the morning on November 2, 2017.

Deepika and Alia were snapped bonding with each other and also posed for the shutterbugs. Alia looked fresh in a striped t-shirt and ripped denims while the Padmavati actress looked gorgeous in a black long tunic and a pair of ripped denims. A chopper was seen outside the Alibaug bungalow which brought and took back guests from the party.

All the guests at the party were seen having a great time as they let their hair down and spent some quality time amidst friends and colleagues. Some of the close friends arrived at the party venue a day before. Shah Rukh, as promised, invited the media to his bungalow for a cake-cutting session and thanked the fraternity for their wishes.

On the work front, Shah Rukh started off the year 2017 with the film Raees, which got mixed reviews but was received well by the audience and performed well at the box office. The film had a clash with the Hrithik Roshan-starrer Kaabil, but both the films performed equally well.