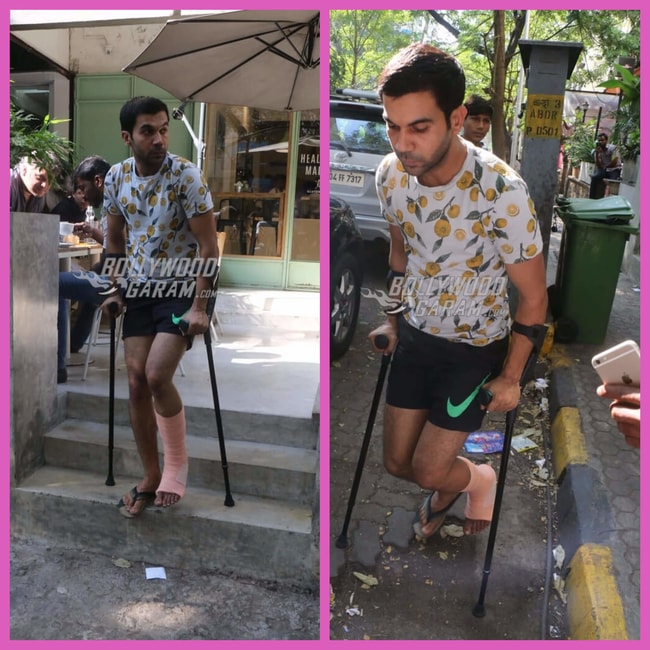 Rajkummar Rao has often been spotted at TV shows and other promotional events ahead of his film releases. This time he was photographed spending some leisure time by himself at a popular restaurant in Bandra, Mumbai. Rajkummar Rao who had hurt himself during the rehearsal shoot of one of the episodes of Farah Khan’s new show, The Lip Sing Battle was seen outside the Kitchen Garden, Bandra on November 5, 2017 making his way using a walking stick and with his left foot bandaged.

Rao was dressed in casuals for the leisure outing and was seen in a printed t-shirt and dark blue Nike shorts. His upcoming film, Shaadi Mein Zaroor Aana will see him romancing Kriti Kharbanda where both feature in a love story set in the backdrop of India’s civil services and meet for a proposed arranged marriage to eventually fall in love. However, their marriage does not take place as a result of a series of unexpected events and the two come across each other five years later in a different setting and situation and the story revolves around the middle-class couple.

Directed by Ratnaa Sinha and jointly produced by Vinod Bachchan, Manju Bachchan and Kaleem Khan, the film is slated to release on November 10, 2017.

Ahead of the film’s release, Rajkummar has been seen promoting the film on various platforms. He and Kriti, his co-star from the film were snapped during a promotional event in the city where Rao was seen in a shaded blue t-shirt, white jacket and white loose pants and using the walking stick. Kriti had made a stylish appearance in a white checkered outfit and heels.

Rao will soon also be seen opposite Aishwarya Rai Bachchan in Fanney Khan helmed by Atul Manjrekar that will also star Anil Kapoor in a pivotal role and will hit the theatres on April 13, 2018.

Exclusive photos of Rajkummar Rao outside popular eatery in Mumbai!