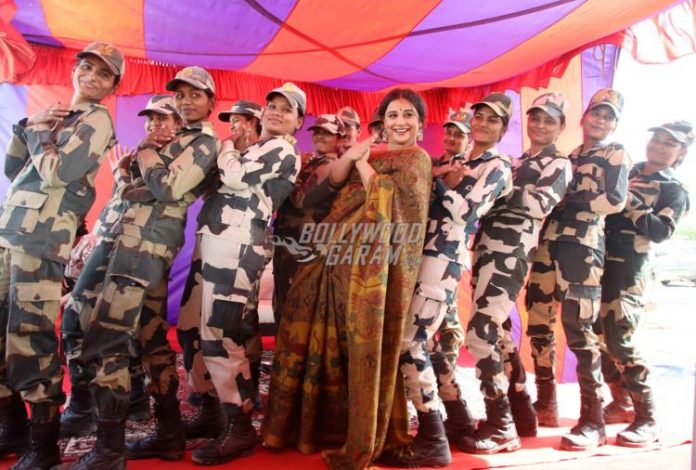 While Vidya Balan visited Gujarat to promote her upcoming film Tumhari Sulu, the actress took out time and reportedly traveled to the Rann of Kutch to the Vigakot outpost of the Indian Army on November 7, 2017. Despite a harsh sun, Balan took her Main Kar Sakti Hai spirit of her character Sulu at the Vigakot post. The place has a very sensitive position on the map of India but that did not deter the actress from spreading her energy.

Vidya appeared in a hand-woven sari and managed to entertain the battalion with her warmth and charm. The actress interacted with the jawans who came from different parts of the country. Vidya was able to communicate in the local languages along with Manipuri, Bengali and Oriya. The interaction reportedly also saw one of the jawans sing a patriotic anthem that left Vidya with tears.

Sulu during the fun interaction session taught some of the signature steps to the jawans from the song Hawa Hawai 2.0 from Tumhari Sulu. The song is a revised version of the song Hawa Hawai from the film Mr. India. The jawans post the interaction session insisted Vidya to spend more time with them as they quickly prepared some handmade sandwiches, paneer and pulao for lunch. The actress and her entourage was escorted amidst tight security.

Vidya, while talking about her experience with the Jawans said, “Where do I even begin? Meeting the BSF Jawans at the border has been a humbling privilege and an incredible experience. We are screen heroes, but THEY are the REAL heroes. Such simplicity, zeal, and dedication; a big hats off to them for enabling us to lead our lives without fear”.

The upcoming film also stars Manav Kaul and is directed by Suresh Triveni and produced by T-series and Ellipsis Entertainment. The comedy drama flick is ready to be released in theatres on November 19, 2017.