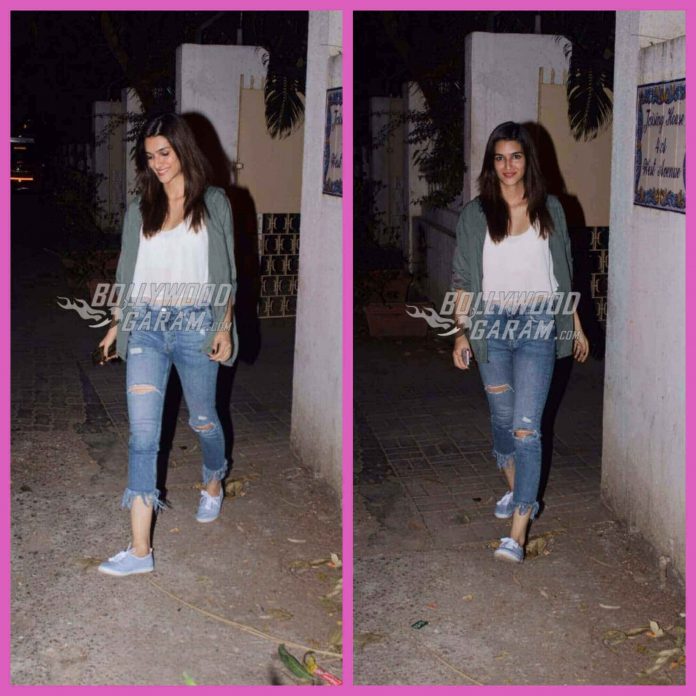 Her charming presence and charismatic performance in movies like Heropanti, Dilwale, Raabta (where she played a double role for the first time of a contemporary Indian girl living in Budapest and another of a reincarnated warrior princess) and Bareilly Ki Barfi have wowed the audiences. Kriti Sanon, a model and actress for both Hindi and Telugu films was spotted in Bandra on November 9, 2017 while she was getting inside her car. The Dilwale actress was seen spending some leisure time on a casual outing in the city in a casual chic avatar with a white crop top, ripped jeans, a dull green jacket and sneakers. She smiled for the shutterbugs while walking up to her car.

Sanon recently appeared on the sets of Lip Sing Battle hosted by Farah Khan along with Hrithik Roshan and Rajkummar Rao who came with a walking stick and bandaged foot as he had previously got injured on the sets of the same show during a rehearsal shoot. Sanon and Rao have worked together in Bareilly Ki Barfi along with Ayushmann Khurana.

Sanon has never disappointed the fashion police – whether it is her airport looks, or as the ambassador of Nakshatra Gili or even while attending Diwali parties of insiders from the film and TV industry.

The Raabta actress has slowly but eventually risen to prominence and on being asked in a recent interview about her next onscreen presence after Bareilly Ki Barfi, Sanon said, “There is a film that I have said yes to. I haven’t officially signed but I’ve said yes to it. It should be announced soon. I always prefer it coming from the production. I think it’s their right to be announcing their film. Apart from that, there are two scripts that I’ve heard and I might sign one of them depending on my dates.”