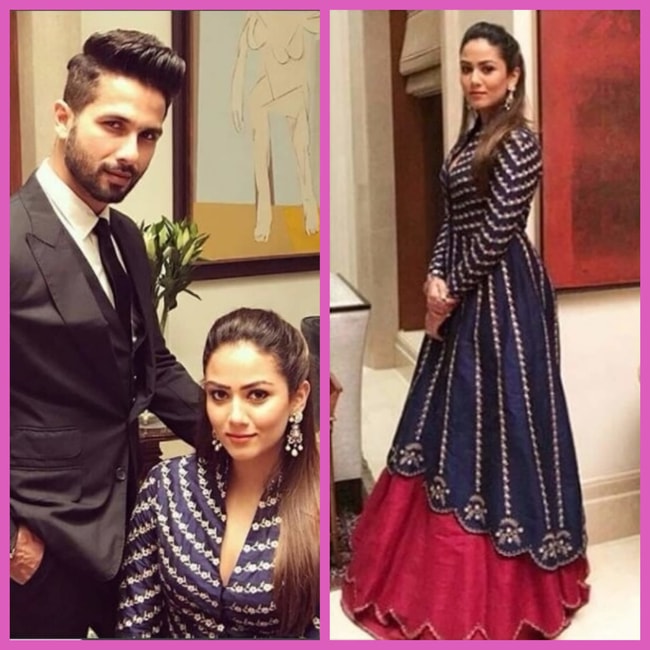 The duo was recently seen featuring for the first time as a couple on the cover page of Hello Magazine and looked great together in ethnic outfits. The actor and his beautiful wife who are also often spotted spending time together now took to Instagram to share pictures as they were dressed in stunning outfits while on their way to a wedding.

While Shahid looked dapper in a monochrome suit with a neat hairdo and a bearded look, wife Mira was seen in a Nachiket Barve outfit – an asymmetrically patterned dark blue kurta with intricate floral work on it, paired with a long pink skirt that had the same hem work as the kurta. Mira completed her look with long pink danglers, matching bracelets and rings for an extraordinarily traditional look.

Both Shahid and Mira posed together in the pictures and looked like the epitomes of grace and regal beauty. While one picture shared by Mira showed her sitting on a couch in her navy blue kurta with Shahid by her side, another showed the duo almost ready to step out in their finest where Shahid has captioned the Instagram post, “Night Out.”

The two who reportedly met through a religious group had got married in a private affair in July 2015 and Misha was born to them in August 2016.

Shahid, on the work front, will next be seen in Sanjay Leela Bhansali-helmed film, Padmavati where he will star along with Deepika Padukone and Ranveer Singh. Shahid’s character in the film is that of Maharana Rawal Ratan Singh while Deepika will be starring as Rani Padmini and Ranveer will be the invader of Chittor, Alauddin Khilji. The magnum opus is slated to release on December 1, 2017.