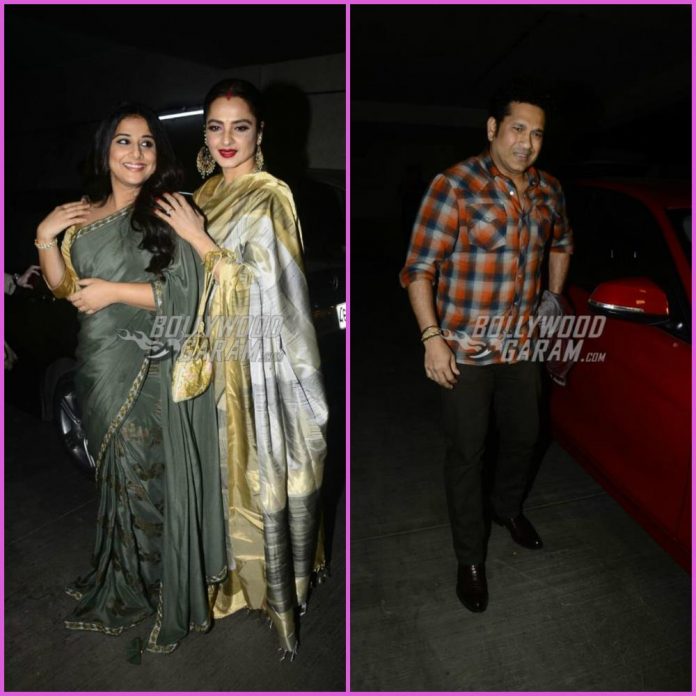 Vidya Balan hosted a special screening of her upcoming film, Tumhari Sulu in Mumbai on November 14, 2017. The screening event was graced by Sachin Tendulkar, Rekha, Neha Dhupia, Saiyami Kher and others.

Neha, who also plays an important role in Tumhari Sulu, looked gorgeous in a pink jumpsuit with long earrings. Saiyami Kher too looked pretty in an all-black outfit. The upcoming film, Tumhari Sulu also stars Manav Kaul and RJ Malishka and is ready to be released in theatres on November 17, 2017.

Vidya will be seen playing the role of a night RJ. The actress, in recent times, has played intense roles on screen and Vidya confessed that she had a great time shooting for the role of Sulochana, who is a middle-class housewife and lands a job of a night Radio Jockey. Vidya, while talking to a leading daily said, “I definitely know that I’ve not had fun on the screen for a while. I’ve been playing very intense and heavy characters, and after a long time, I got to play this character, who is always smiling, laughing and making people laugh.” The upcoming film is directed by Suresh Triveni.