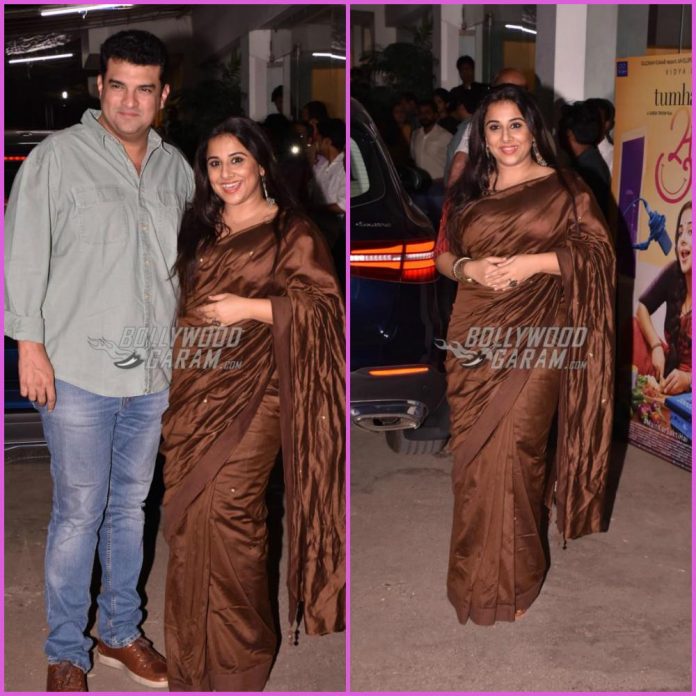 Vidya Balan is busy promoting her upcoming film, Tumhari Sulu which is ready to be released in theatres on November 17, 2017. The actress along with husband, Siddharth Roy Kapur attended the special screening of Tumhari Sulu in Mumbai on November 13, 2017. Vidya looked gorgeous in a brown sari and completed her look with bangles and earrings.

UTV honcho, Siddharth looked great in a grey shirt, denims and brown shoes. The screening event also saw the director Suresh Triveni. The upcoming film will see Vidya playing the role of a middle-class woman, who gets an opportunity to become a night radio jockey.

Vidya talked to a leading daily about the film and said, “At this point, I would say that I have watched Tumhari Sulu and I am happy with the film. I feel we have made a good film. So, I am happy about that. I don’t think much about numbers. I feel, why should I limit myself thinking about Box Office numbers; maybe we can touch the sky.’’ The actress has in recent times played intense roles on screen but the upcoming film will be completely different.

Tumhari Sulu also stars Neha Dhupia and Manav Kaul and is ready to be released in theatres on November 17, 2017. Vidya was last seen in the film Begum Jaan, in which she played the role of the madam of a brothel. Tumhari Sulu will allow the audience to see Vidya playing a happy and cheerful role.