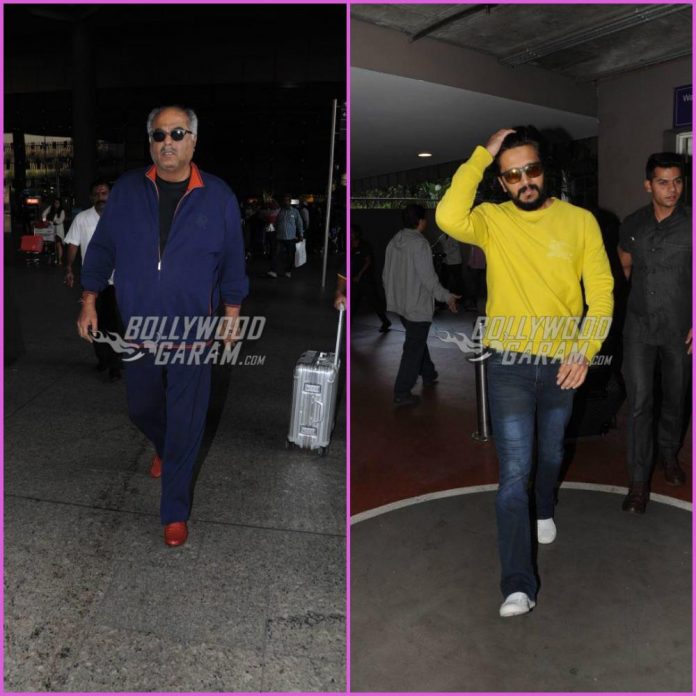 Producer Boney Kapoor and actor Riteish Deshmukh were snapped at the airport in Mumbai on November 15, 2017. Riteish, who was last seen in the film Bank Chor, was seen in a yellow pullover and was all smiles for the paparazzi at the airport. Boney, whose last production Mom with wife Sridevi, was critically acclaimed, was seen in a t-shirt, track pants and a zipper jacket as he made his way through the airport.

Deshmukh is currently filming for the upcoming Marathi flick, Mauli and is also looking forward for the release of the film, Total Dhamaal. The upcoming third installment of the Dhamaal series will feature Anil Kapoor and Madhuri Dixit in lead roles. The film is directed by Indra Kumar and jointly produced by Indra Kumar, Arjun N Kapoor and Ashok Thakeria.

The sequel of Mr. India has been in news since a long time, but no official announcement has been made. Boney Kapoor is surely planning something new for Mr. India 2 which will have new faces and will also have new a new director on board.

Exclusive photos of Boney Kapoor and Riteish Deshmukh at the airport!