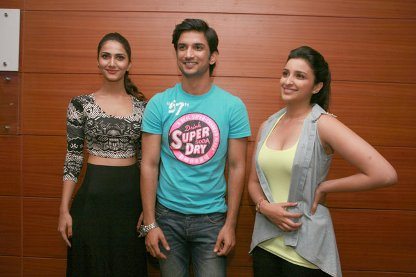 BollywoodGaram.com: The promotions for the upcoming movie Shuddh Desi Romance are in full swing. The stars of the movie, Sushant Singh Rajput, Vaani Kapoor and Parineeti Chopra, were  promoting the movie on the sets of Zee TV’s show ‘Dance India Dance Super Moms’.

‘Shuddh Desi Romance’ is directed by Maneesh Sharma and is produced by Aditya Chopra. The movie is a fresh romantic comedy and it takes place in today’s modern yet desi land. The movie has Sushant Singh Rajput – who will be making his debut as a movie star – as well as actress Vaani Kapoor in the leading role.

The 3 stars danced on the show as part of their promotions for the upcoming movie.