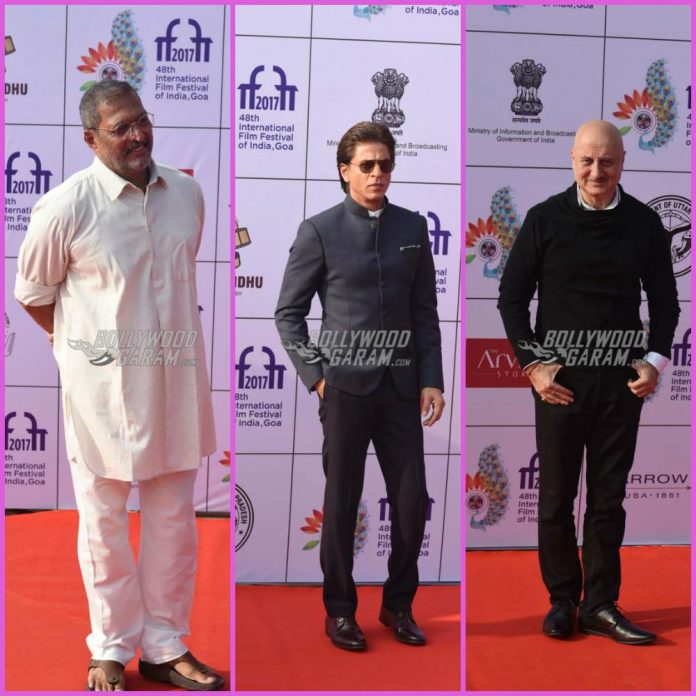 The who’s who of Bollywood graced the 48th International Film Festival of India (IFFI) near Panaji, Goa on November 20, 2017. This year Bollywood megastar Shah Rukh Khan inaugurated the festival. The Dilwale actor spoke at the inauguration ceremony which was also attended by the Union Minister of Information and Broadcasting, Smriti Irani.

The IFFI 2017 also saw the presence of Nana Patekar, Anupam Kher, Siddharth Roy Kapur, Subhash Ghai, Divya Dutta, Miyang Chang, Ishaan Khatter, Radhika Apte, Rajkummar Rao and others. Shah Rukh during his talk said, “There is a word in Sanskrit ‘Vasudhaiva Kutumbakam’. It means bringing the world together like a family. I believe no matter what your language is, no matter what country your story comes from, and no matter what your ideology is, story-telling and listening should be a familial experience which binds us together.”

The actor also expressed his disappointment about the protests against the film Padmavati. Shahid Kapoor while talking to the media about Padmavati said, “It will be a precedent which I am not proud of if the film finds it difficult to release. I believe that the film will release. I believe that this process is difficult and like I said, I went through a similar process with Udta Punjab”.

The festival also saw the presence of Manohar Parrikar, the Chief Minister of Goa. The festival will be screening 10 world premieres, more than 64 Indian premieres and 10 Asian and International premieres.