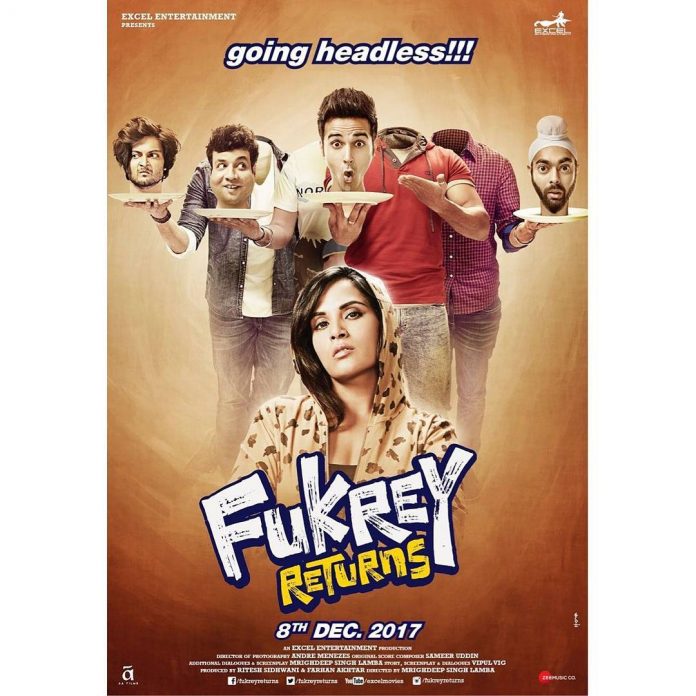 While the protests against the upcoming film, Padmavati continues, the whole of Bollywood has come together in support of the makers of the film. While many celebrities have condemned the protests, makers of upcoming film, Fukrey Returns have released a new poster to show support with a sense of humour.

In the Padmavati controversy, Deepika Padukone and Sanjay Leela Bhansali have received threats of being beheaded and Fukrey Returns has taken the situation in a quirky way. The new poster has shown the Fukra boys headless and are seen serving their heads on a platter.

The upcoming film is the sequel to the 2013 film Fukrey. The film stars Pulkit Samrat, Ali Fazal, Varun Sharma and Manjot Singh, who are unemployed and have indulged in a new plan to become rich with a shortcut. Once again, the youngsters come across Bholi Punjaban played by Richa Chadda. The trailer of the sequel has shown revisiting the story line of Fukrey with a twist as Choo Chaa, played by Varun now gets future visions that lead to hilarious situations.

The makers also announced a pre-pone in the release date. Fukrey Returns was originally supposed to release on December 8, 2017 but then got postponed to December 15, 2017. With the delay of Padmavati, which was about to release on December 1, 2017, Fukrey Returns has returned to its original release date on December 8, 2017. The earlier film got a good response from the audience and critics and also scored well at the box office. The trailer has left the audience wanting for more as more craziness is assured in the sequel. The upcoming film is directed by Mrighdeep Singh Lamba and is co-produced by Ritesh Sidhwani and Farhan Akhtar under the banner of Excel Entertainment. On the other hand Padmavati will not be releasing on December 1, 2017 and the new release date is yet to be announced.