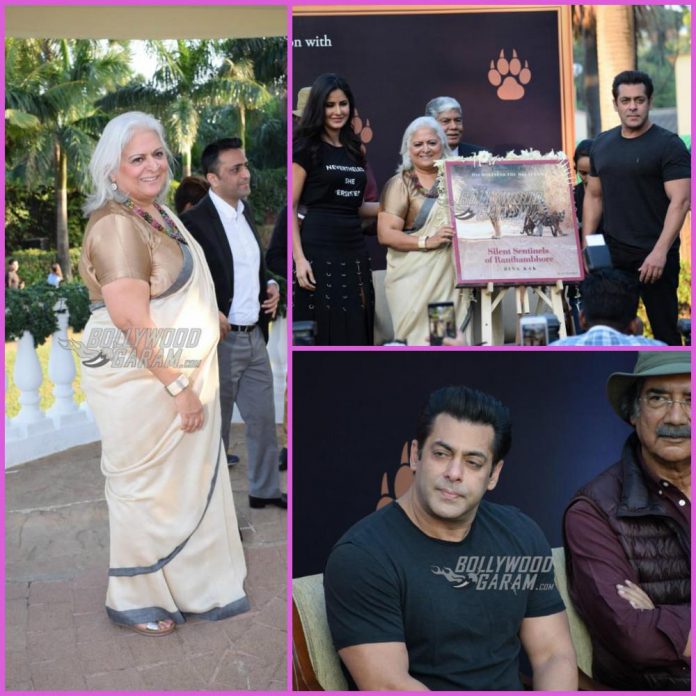 Salman Khan along with his co-star Katrina Kaif launched Bina Kak’s book Silent Sentinels of Ranthambhore at an event in Mumbai on December 13, 2017. Salman was all praises for the author Bina Kak and her book.

The Dabangg star said, “I think it is a great book because I have seen all the pictures much before they have released. All the pictures are really nice and beautiful”. Bina Kak is known for her closeness with the Khan family. The book launch also saw the attendance of Priya Dutt, Baba Siddiqui, Salim Khan and others.

Salman during the event said that every time his movie release is nearing, Kak comes out with a book and added, “I don’t understand whether we are here promoting Tiger Zinda Hai or her book. It had happened earlier, I was doing Sultan with Ali Abbas Zafar, we were planning on going to Ranthambhore, at that time Bina issued a book on a tiger named Sultan, but the plan didn’t work out. Now Tiger Zinda Hai is coming and her book is also releasing at the same time”.

Katrina for the launch event looked great in a black skirt with slits and a black t-shirt while Salman too was seen in a black t-shirt and black pants. Salman is currently looking forward for the much awaited release of his upcoming flick Tiger Zinda Hai, which is the sequel to the film Ek Tha Tiger. The film is directed by Ali Abbas Zafar and is ready to be released in theatres on December 22, 2017.