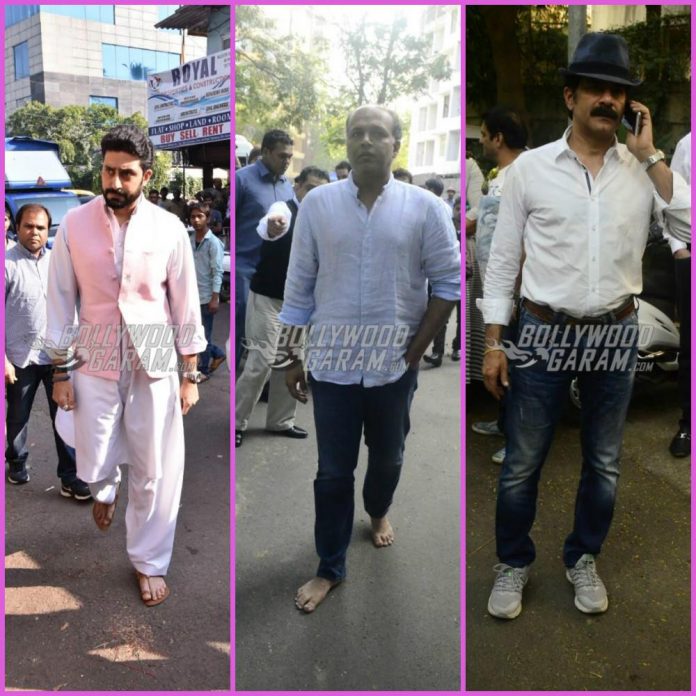 Celebrities from Bollywood mourned the death of the actor and filmmaker Neeraj Vohra at the funeral ceremony on December 14, 2017. Abhishek Bachchan, Paresh Rawal, Vrajesh Hirjee, Ashutosh Gowarikar, Deepak Tijori, JD Majethia and others were snapped attending the funeral of the late writer and filmmaker.

Neeraj passed away at 4 am after being in the state of coma for about a year. The actor has been in the condition since 2016, when he suffered a heart attack and a brain stroke. Neeraj was expected to be back to direct Hera Pheri 3, which has been announced by the makers. The actor was at Sajid Nadiadwala’s bungalow, where a portion was converted in to an intensive care unit.

Close friends and colleagues of the actor were seen bidding adieu with teary eyes. Nadiadwala, in an earlier interview talked about Neeraj and said, “He’s been responding to audio therapy, particularly when we play his father’s (Pandit Vinayak Rai Nanalal Vora) music. He has yet to recover his speech but there are no infections or bed sores and the doctors have assured us that his life is out of danger.”

Even Suniel Shetty had earlier talked about the film Hera Pheri 3 and said that the film would go on floors as soon as he is fit. Neeraj was rushed to the hospital after his conditioned worsened at home. The actor made a mark in Bollywood when he turned writer for the film Rangeela starring Aamir Khan and Urmila Matondkar.