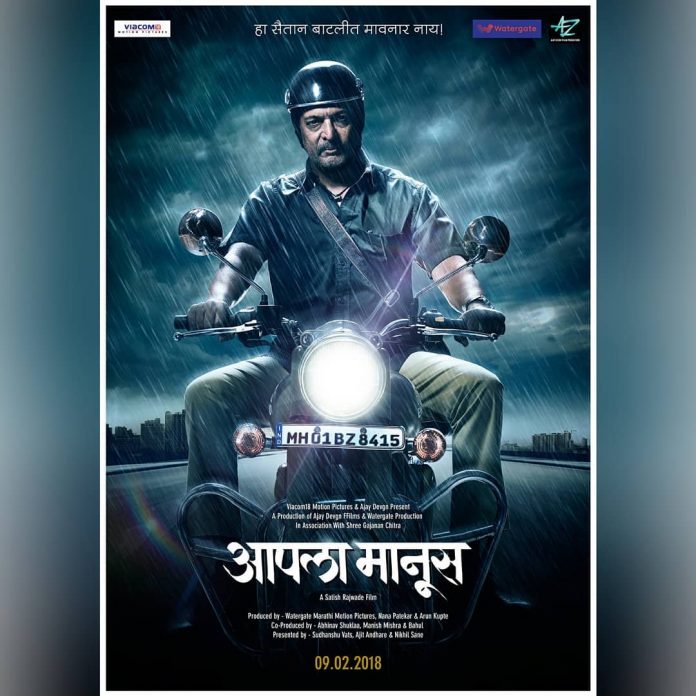 Ajay Devgn, who is currently enjoying the success of his recently released film Golmaal Again, unveiled the first poster of his Marathi venture Aapla Manus. The film will mark Ajay’s debut as a producer in Marathi films and has Nana Patekar in the lead role.

The poster has shown veteran actor Nana Patekar riding a bike amidst heavy rain. Ajay shared the poster on his Twitter account and wrote, “And here it comes… the first look of our Marathi film Aapla Manus. @nanagpatekar @sache09 @sumrag @irawatiharshe @Sudhanshu_Vats @aplamanusfilm”

The Baadshaho actor in an earlier interview talked about how he completed 25 years in the industry and how his equation with the audience never changed. Ajay added that he has a strong bond with Maharashtra since birth and has always loved Marathi language. The actor also said that he fell more in love with the language and Marathi culture after getting married too Kajol.

Ajay is at present shooting for the upcoming film Raid which also stars Ileana D’Cruz. The actor will be seen playing the role of an income tax officer. The film is directed by Raj Kumar Gupta and produced by Abhishek Pathak, Bhushan Kumar and Krishan Kumar and is due to be released in theatres on March 16, 2018.