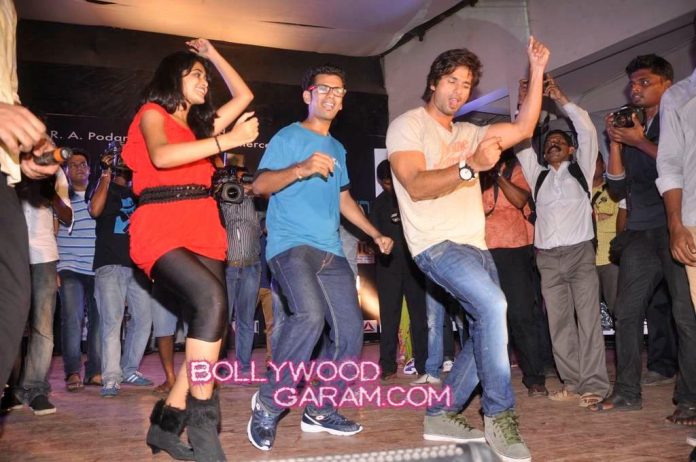 BollywoodGaram.com: Bollywood dancing hero Shahid Kapoor is on a promotion spree for his upcoming movie ‘Phata Poster Nikla Hero’ and was recently spotted at  Poddar College’s fest in Mumbai to promote the movie. As expected, the ‘Kaminey’ actor was seen flaunting his cool dance moves to the students, who also joined him on stage to show off their talent.

The 32-year-old actor said that he had great fun and that the crowd was lovely. Shahid said, “It so cool to come to college and be a part of the fest and they are all so welcoming and loving that I am really touched”.

The movie is directed by Rajkumar Santoshi and also stars Ileana D’cruz in the lead role. Phata Poster Nikla Hero is due to be released on September 28, 2013.

Just a few days ago, the star was spotted on an Indian dance reality show “Dance Indian Dance” promoting his movie at the same time ex-girlfriend Priyanka Chopra was present to promote her movie “Zanjeer”. Photos