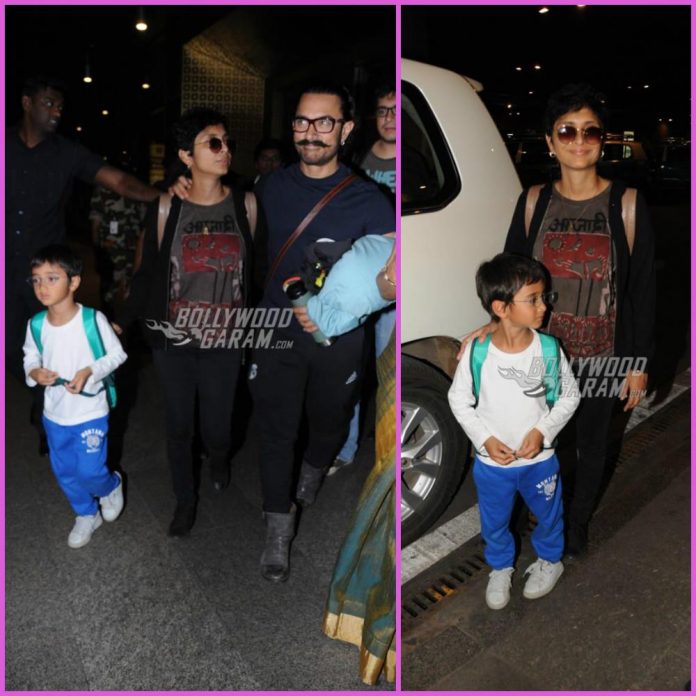 Aamir Khan, Kiran Rao and son Azad had been on a holiday to ring in the New Year. The family was snapped at the Mumbai airport as they returned from holidays on January 2, 2018.

Azad looked tired yet managed to put up a smile as he posed with his mother Kiran Rao. Aamir during a recent interview was asked about how he deals with the media attention that his kids get to which he said, “I mean that is something which I have been dealing for 23 years, that is what Junaid’s age. We were concerned about that since Junaid was born. We have tried our level best to give them a normal life as much as possible. I am happy to say that Junaid and Ira have turned out to be wonderful adults. They are very caring and are very sorted in their heads. And hopefully, Azad will also be the same.”

The Dangal star was recently shooting for the upcoming film Thugs of Hindostan in Bangkok but then took a break to spend the New Year’s eve with his family. Azad looked adorable in a white t-shirt, blue track pants and white shoes as he made his way through the airport. The film Thugs of Hindostan also stars Fatima Sana Sheikh, Katrina Kaif and Amitabh Bachchan.