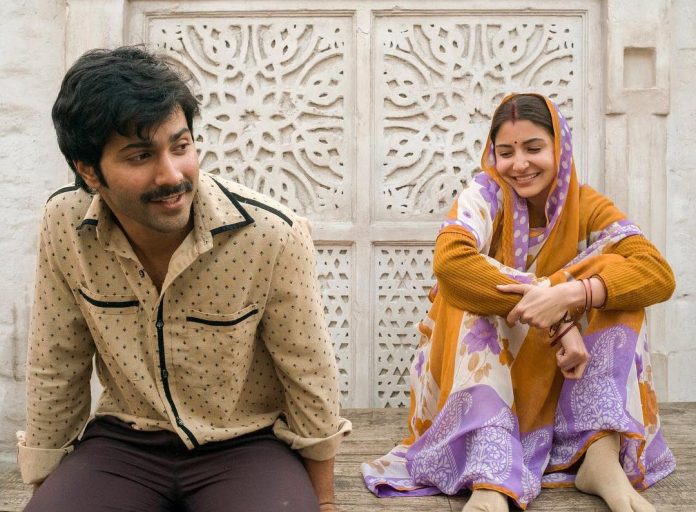 Anushka Sharma and Varun Dhawan have started filming for their upcoming film Sui Dhaaga – Made In India in Bhopal. As the film has gone on floors, the makers have dropped the first look of the film that features Anushka and Varun in lead roles.

The picture has shown Anushka and Varun as the perfect small-town couple. Anushka can be seen in a simple printed sari with a brown sweater with traditional bindi and sindoor on her forehead while Varun can be seen sporting a mustache look in a printed shirt and a trouser. The Badrinath Ki Dulhania actor will be seen playing the role of Mauji while Anushka will be seen as Mamta in the flick.

Anushka’s desi look and a vibrant smile has already won hearts and has left the audience wanting for more. Sui Dhaaga – Made In India is directed by Sharat Katariya and will be based on the Indian roots and the ability to celebrate the spirit of self reliance. Varun had earlier talked about the film and said, “From Gandhiji to Modiji, our leaders have always endorsed the mantra of Made in India. With Sui Dhaaga, I am proud to take their message to millions of movie lovers in a way that is entertaining and relevant. I really liked the script that Sharat had written and I am happy that I am teaming up with YRF on this one. Anushka and I are pairing up for the first time so I am sure there will be fireworks.”

Even Anushka expressed that she is excited with the unique ideas that have human stories. The actress added that the lead characters in Sui Dhaaga will show a story of self reliance that will help to connect to the Indian audience. The film is produced by Maneesh Sharma and also stars Govind Pandey. Sui Dhaaga – Made In India will be released in theatres on September 28, 2018.