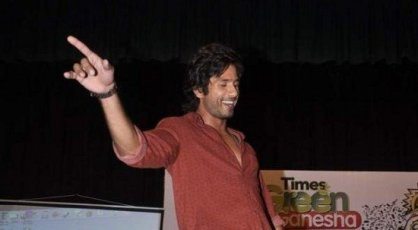 Bollywood star Shahid Kapoor attended the launch of the sixth edition of the Times Green Ganesha (TGG) campaign at Mumbai’s Lala Lajpat Rai College on September 4, 2013. The TGG campaign is an annual drive which has the goal to promote the environment-friendly Ganesh festival.

During the event, Shahid said that it is a great feeling to be welcomed warmly by the audience and that people there were fantastic. Ganesh Chaturthi is only three days away and people across the country are stressing on the need for an eco-friendly Ganesh festival in 2013, in order to save our environment from pollution and make it a better place.