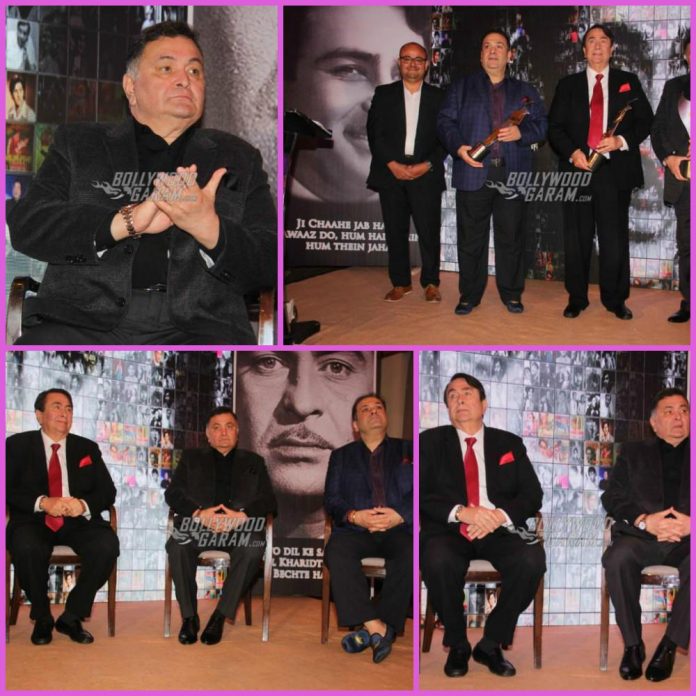 A special event was organized to honor the veteran star Raj Kapoor in Mumbai on February 14, 2018. The event saw the attendance of the Kapoor siblings Randhir Kapoor, Rishi Kapoor and Rajiv Kapoor, who were present to honor their father Raj Kapoor.

Rishi Kapoor and Randhir Kapoor for the event looked dapper in a black suit while Rajiv opted for a blue suit. Raj Kapoor during his career played all roles from a producer, director, editor and also a musician. The star was best known for the song Mera Naam Joker from the film Awara.

The Kapoor family has always celebrated the lives of the legends that ruled Bollywood. Be it Shashi Kapooor, who recently passed away or Raj Kapoor, who made a mark in the industry with his charm and skills. Son Rishi Kapoor had opened up about his father in his book, an autobiography with the title Khullam Khulla: Rishi Kapoor Unsensored and wrote, ”My father, Raj Kapoor, was 28 years old and had already been hailed as the ‘showman of Hindi cinema’ four years before. He was also a man in love – at the time, unfortunately, with someone other than my mother.”

The Kapoor family had also launched the book on Raj Kapoor with the title, Raj Kapoor: The One and Only Showman. The book is a tribute to the veteran star by his children Nitu Nanda, Randhir Kapoor, Rima Jain, Rishi Kapoor and Rajiv Kapoor. Rajkapoor: The One and Only Showman was produced by RK Films and Studio and was presented and edited by Ritu Nanda.