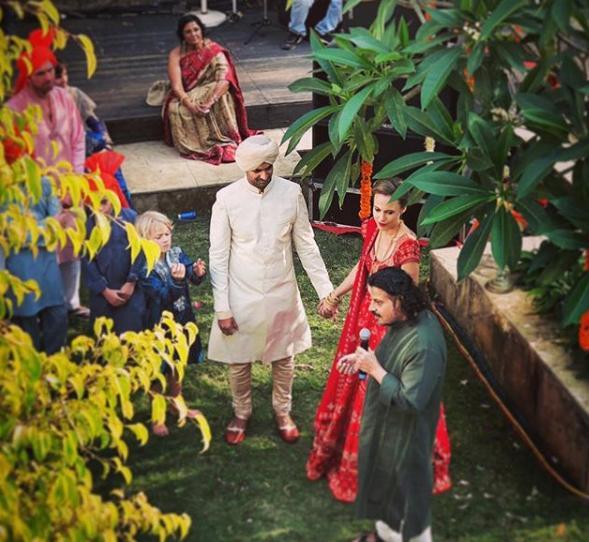 TV actor and model Purab Kohli, got married to his British girlfriend Lucy Paton on February 15, 2018. Actress Amrita Puri, who has been a co-star to Purab in P.O.W: Bandi Yuddh Ke, broke the news and shared a picture with the groom on her Instagram account. Purab and Lucy got married in a private ceremony in Goa.

The wedding ceremony was attended by just a few family members in Goa which was attended by a few family members. Purab was dressed in a beige sherwani and a matching turban while the bride looked pretty in a traditional red lehenga. Lucy and Purab are already parents to two year old daughter Inaaya. The actor earlier spoke about not getting married earlier and said that he did not want the child to think that her parents got married under the pressure of having her out of wedlock.

Purab added, “There was pressure to get married. My mother was the most concerned and my family did say ‘you guys have to get married quickly’ when Lucy was pregnant. But I was adamant about not doing it because I never wanted my baby to feel that we got into a relationship because she was coming. Her coming into this world has transformed both our lives for the better.” The actor also spoke about fatherhood and said that it is a gift that he wished upon everyone especially when it is a daughter.

Purab Kohli has constantly posted pictures of his daughter Inaaya on his Instagram account. On the work front, the actor was last seen in the film Noor which also starred Sonakshi Sinha. The actor also made a mark in Bollywood with some of his films including Rock On, Bas Ek Pal, Who Lamhe, Turning 30, Shaadi Ke Side Effects, Airlift and more. Purab started off in Bollywood with the film Bas Yuhin opposite Nandita Das.

My Sartaj Singh is hitched! Congratulations to my reel life husband! Wishing you all the love in the world @purab_kohli & Lucy Kohli ? ✨? #mandown #sartajsingh #pow