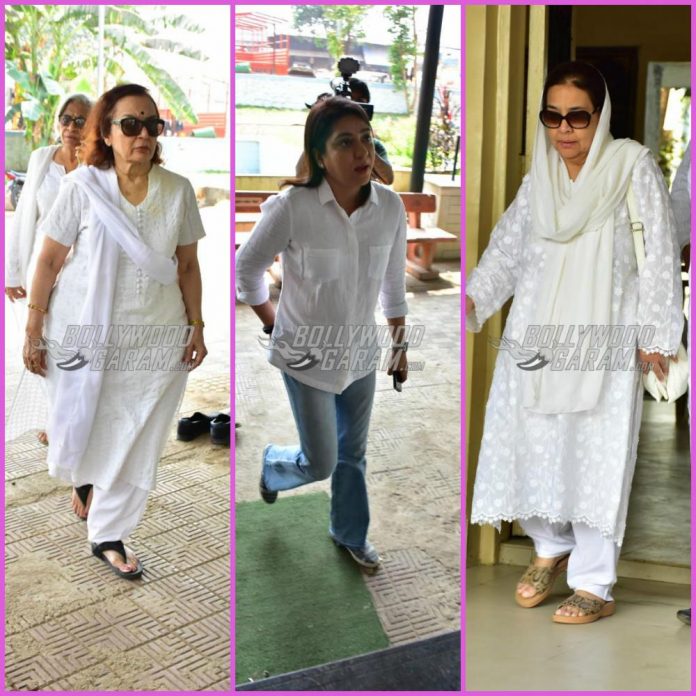 Bollywood actress Nargis Rabasi, fondly known as Shammi Aunty, passed away at the age of 89 on March 6, 2018. Celebrities from Bollywood attended the funeral ceremony of the veteran actress, who died of prolonged illness.

Farah Khan, Boman Irani, Asha Parekh, Meher Vij, Manav Vij, Sushant Singh, Annu Kapoor, Priya Dutt, Farida Jalal and others were snapped at the funeral ceremony. Shammi Aunty was popular among many celebrities in Bollywood and appeared in more than 100 films. Reports say that the actress did not have any relatives except an adopted son Iqbal Rizvi, who stayed close by but not in the same apartment.

The actress was alone at the time of her death. The Dekh Bhai Dekh actress lost her sister, designer Mani Rabadi a few years back and since then she rapidly became immobile and forgetful. Asha Parekh, who has been her friend since more than 50 years said, “I haven’t wept so much since I lost my parents. I called her Shammi Aunty. She was much older than me. But we were best friends for years. She shared everything with me. It was a natural-born trait in her to win people’e confidence.”

The actress got married to filmmaker Sultan Ahmed , but described it as a big mistake of her life and soon parted ways. The actress was born in a family of Parsi priests and started her career in 1949 with a film known as Ustad Pedro with Sheikh Muktar. The film was a hit and since then there was no turning back. Shammi had once told her writer that she enjoys doing comedy. Her last film was Shirin Farhad Ki Toh Nikal Padi.