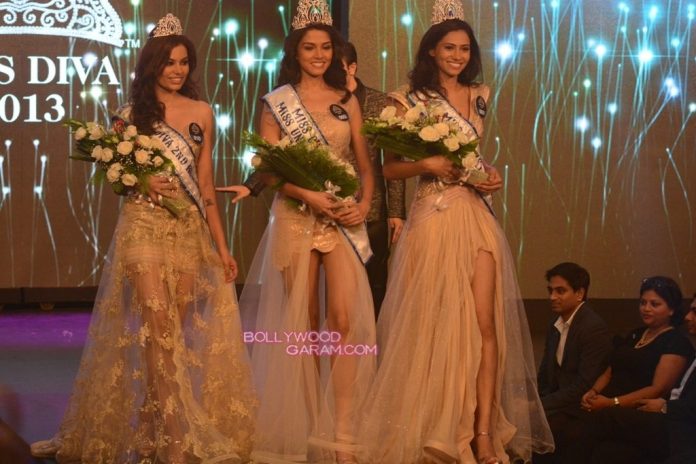 BollywoodGaram.com: The star-studded event of the Miss Diva 2013 pageant came to an end on September 5, 2013 and the winners of the glamorous event have been declared finally. The Indian beauty pageant took place at Westin Mumbai Garden City in Mumbai.

Manasi Moghe was crowned the winner of the pageant, while Gurleen Grewal and Srishti Rana have been declared as the first and the second runners-up at the event.

The event was hosted by RJ Mantra and Vivan Bhatena.

The Miss Diva 2013 pageant was attended by some of the great names of the fashion world, as well as celebrities from Bollywood. The show was judged by Malaika Arora, Zeenat Aman, Raveena Tandon, Jacqueline Fernandez and Atul Kasbekar.

Apart from the beauties, the evening also had stand-up comedians like Vrajesh Hirjee and Sunil Grover. The evening also featured a performance by sensuous model and actress Gauhar Khan.

The winners of the evening were crowned by Raveena Tandon, Zeenat Aman and Former Miss Canada Sahar Biniaz.