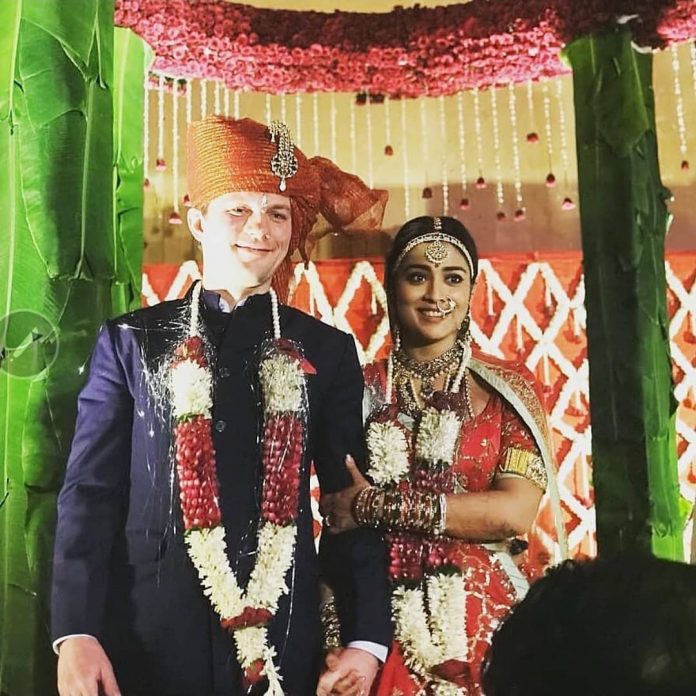 Shriya Saran, who is a popular actress down south, got married in a private ceremony to Andrei Koscheev in Mumbai and is now hosting wedding festivities in Udaipur, Rajasthan in India. A few pictures have gone viral online that were posted by trade analyst Ramesh Bala and film producer Tanuj Garg on social media.

Going by the pictures, the actress made a beautiful bride in a traditional red lehenga while husband Andrei Koscheev complimented her in a blue bandhgala outfit. The pictures have also indicated that the two had a traditional Hindu wedding ceremony.

Talking about Andrei, he is a national level tennis player and is also the owner of a chain of restaurants in Moscow. The wedding ceremony in Udaipur was reportedly a private affair with the just the presence of family members and close friends. The only celebrity guests who made it to the wedding were Manoj Bajpayee and wife Shabana. The Mumbai wedding ceremony saw the presence of Shriya Saran wearing a pink lehenga which was held at her residence in the city.

Shriya is known for keeping her personal life very private and has not yet shared any pictures of her wedding on the social media. The 35 year old actress is best known for her films Tujhe Meri Kasam, Drishyam and Awarapan.