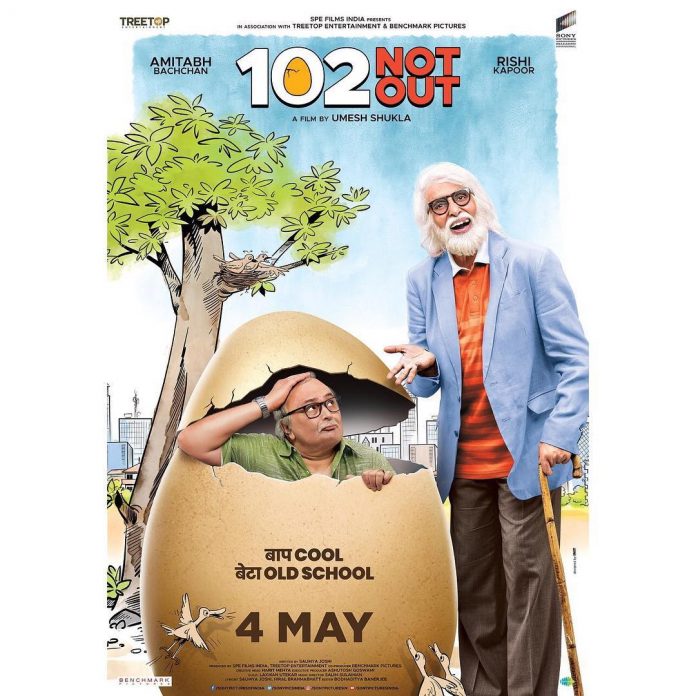 The audience will soon get to see Amitabh Bachchan and Rishi Kapoor together on the silver screens after 27 years in the film 102 Not Out. Amitabh Bachchan will be seen playing the role of Rishi Kapoor’s father and the two will be teaming up for a film after about three decades. A new poster of the film was unveiled today by Mr. Bachchan through his Twitter account.

The Black actor will be seen playing the role of a 102 year old man and Rishi will be seen as his 75 year old son. The new poster has shown Rishi Kapoor coming out if an egg shell and staring at Big B who is laughing out loud. Mr Bachchan captioned the poster, “T 2752 – Baap COOL, beta OLD SCHOOL! Presenting first look of #102NotOut! Celebrate life with this unusual father-son duo on 4th May! @chintskap @umeshkshukla @SonyPicsIndia #TreeTopEntertainment. COME ONNNNNN .. !!!”

Rishi Kapoor too tweeted the poster and said, “Baap COOL, beta OLD SCHOOL! Here’s presenting the first look of #102NotOut! Celebrate life with this unusual father-son duo on 4th May! @SrBachchan and I back after 27 years !!!!! @umeshkshukla @sonypicsindia #TreeTopEntertainment”

The film is directed by Umesh Shukla and will be ready to be released on the silver screens on May 4, 2018.